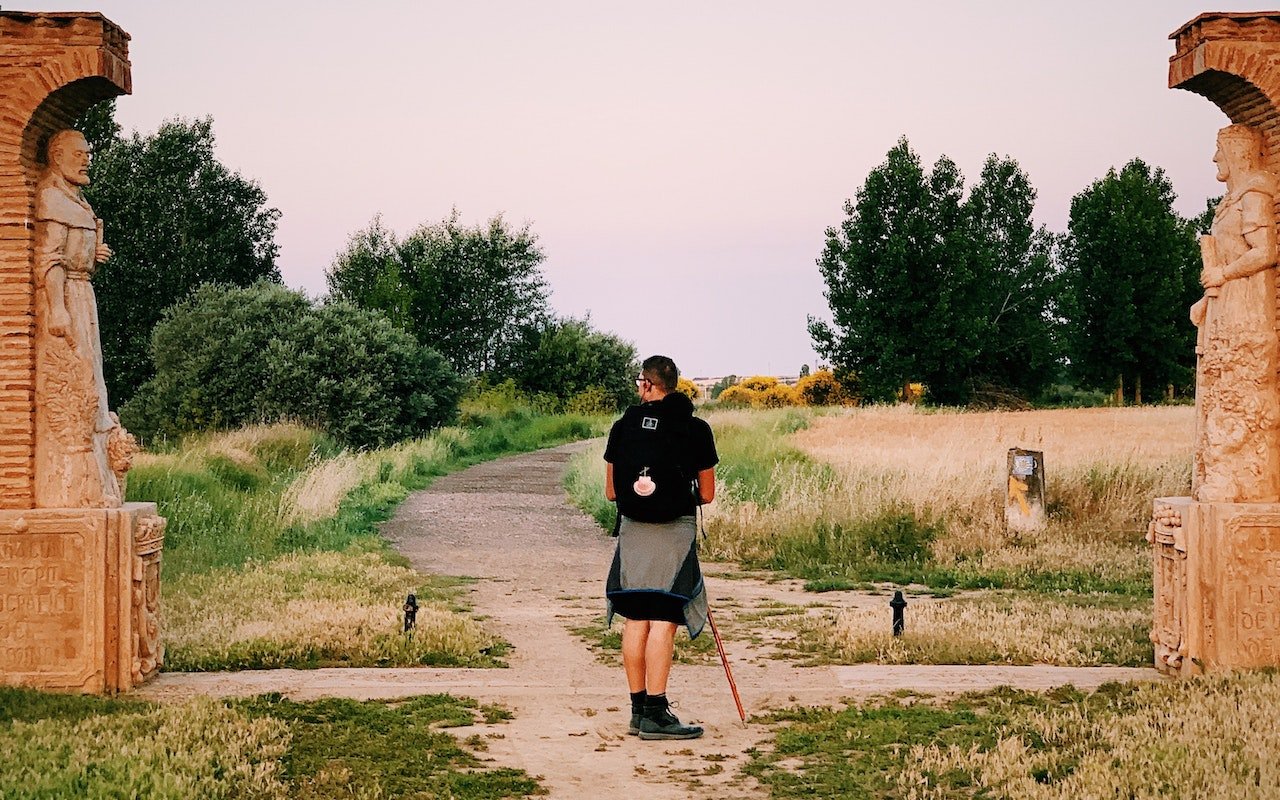 In the first installment of this series, I wrote about sacred “high places”—temples and shrines that lifted priests and worshippers toward the heavens, bringing them closer to the divine. It’s an interesting fact of history that in the ancient world, on every inhabited continent, civilizations placed their most sacred spaces upon or within mountains—whether natural or artificial. When it came to holy architecture, it seems, global intuitions were remarkably aligned.

This essay, the second in the series, is about the holy quest or pilgrimage. And in fact, holy structures like the ones described above—just like their successors, Catholic cathedrals and Islamic mosques—could be destinations of such religious journeys. The temple of Zeus on Mt. Olympus, for example, was a major object of pilgrimage for centuries, attracting the pious even in times of war. In the Americas, pilgrims traveled hundreds of miles to feast, trade, and perform rituals at grand ceremonial centers like the one at Chaco Canyon in New Mexico.

It’s important to note that a spiritual trek need not be long or arduous to have emotional impact. For some faithful, now and in ancient times, a “pilgrimage” could be brief and local, as when reverent priests climbed the steep inclines of Sumerian ziggurats or Mayan temples to perform their rituals.

Labyrinths—flat, circular mazes inscribed on floors—can also provide a brief, local pilgrimage experience. (The most famous such labyrinth can be found in the cathedral at Chartres.) For many others, however, sacred places have inspired longer, more difficult sojourns, and their mystique is a property of their distance. Their remoteness makes them a symbol of something more ineffable, more enchanting. They beckon from afar with a haunting magnetism—as mysterious silhouettes on the horizon, perhaps, or even just rumors on the lips of strangers.

In my effort to trace the aesthetic and spiritual properties of holy quests across the centuries, I will divide this essay into three sections: Roads, Gateways and Lodestars. “Roads” are the paths traveled by pilgrims and searchers, often marked and engineered to add meaning to the traveler’s experience. “Gateways” are ceremonial entrances, often grand and imposing but sometimes humble, marking the traveler’s passage from one stage to the next. And “Lodestars” are the focus of the quest—the endpoint, the heart’s desire. They both draw the traveler onward and transform the traveler through their spiritual power. Examples of “lodestars” include the relics of holy figures (such as clothing, possessions, ashes or even body parts), magical objects (such as statues fallen from the sky, or carved jewels of primordial origin), and blessed natural spots, such as the spring at Lourdes, France, or Mount Miwa in Japan.

Many world cultures, having identified precious objects of pilgrimage (“lodestars”), have formalized the ways that pilgrims can reach them. Paths trodden by thousands—and sometimes millions—of pilgrims have become marked by centuries of reverence, toil, and engineering born of necessity. Two of the most famous pilgrimage routes in the world (both still in use today) are the paths to Santiago de Compostela in Spain (holding the relics of St. James) and to Mecca in Saudi Arabia (home to many Islamic holy sites, including the Ka’aba, which contains a black stone of purportedly divine origin). By the 8th century AD, both Compostela and Mecca were attracting swarms of outsiders drawn to their holy attractions.

Accordingly, medieval rulers undertook feats of engineering that literally “paved the way” to these famous cities. In around 780AD, for example, the Abbasid Caliph Al-Mahdi constructed a 900-mile road leading from the major Iraqi cities to Mecca. Along this road, a new infrastructure of both sacred and mercantile buildings arose, accommodating the spiritual and physical needs of the travelers on pilgrimage, or “Hajj.” The road to Compostela was similar, enjoying the support of both Spanish and French nobility. Here, waystations called “hospitals” and “hostels” emerged to help sick travelers and provide shelter for the journeying masses. (These, of course, were the prototypes of our own hospitals and hostels today!) Meanwhile, many of the great churches of the French Middle Ages, including the magnificent structures at Vezelay, Conques, Tours, Moissac and Bourges, acquired their legendary splendor thanks to the offerings of pilgrims on their way to Spain.

Islam and Christianity are both (together with Judaism) Abrahamic religions, and their shared roots surely account in part for similarities in practice. But other major religions also cherish sites of long-standing global pilgrimage. Varanasi (Benares), India—sacred in Buddhism, Hinduism and Jainism—is reached by ancient, temple-lined roads and boasts a highly developed pilgrim infrastructure, including crematories along the Ganges River. To have one’s ashes scattered in the river at Varanasi is to achieve (perhaps) liberation from the cycle of reincarnation.

Meanwhile Nikko, Japan (prized for its Buddhist temples, Shinto shrines and opulent royal tombs) is famous for the “Cedar Avenue” visitors traverse to reach its holy center. Here giant cryptomeria trees, planted in the Edo period, create a natural tunnel (over twenty miles long!) of deep, rich green, sequestering the pilgrim from the tumultuous outer world. About one thousand years ago, in the ancient American Southwest, dramatic rock formations may have created analogous, solemn passageways leading to holy spots—the most important being the sacred depression, or sipapu at Chaco Canyon. It was from here that Ancestral Puebloans believed humankind had emerged at the beginning of time.

The attentive human soul often experiences a thrill when it passes through a certain kind of opening. Indeed, even in the “secular” world things like festive arches (imagine the entrance to Disneyland Resort), grand facades (like on an old movie theater or fancy hotel) and even garden trellises perform this function—but without the controversial religious freight. Like so much of modern culture, these secular structures are pale echoes of something richer; they borrow an aesthetic appearance—and an emotional charge—while leaving spiritual substance behind.

Thus, it’s not surprising that grand entranceways and arches have marked pilgrimage routes the world over for thousands of years. Indeed, these structures create, through their very substance, a million mini-pilgrimages or sacred quests. In passing through one, the seeker undertakes a brief journey of the soul. Famous examples of such holy gateways include the torii of Shinto shrines in Japan, with their blazing red surfaces. Graceful and eye-catching, they mark transition points between the ordinary world and spaces full of kami, or nature spirits.

In India, torana often serve as gateways to Buddhist stupas (mounds containing the ashes of the Buddha); these are carved, arch-like structures whose form (and word origin) is no doubt related to the Shinto phenomenon. In the American Northwest, so-called totem poles can flank the entrance to clan precincts, educating visitors with their dense religious and ancestral symbolism. And at Stonehenge in the south of England, worshippers passed between imposing megaliths on their way to mysterious rituals still little understood today.

A more subtle type of gateway, however, is the grand façade (or building “face”) integrated into the front of a sacred structure. Entrances like these provide that transitional thrill while serving the more practical function of supporting a roof. Medieval cathedrals are famous for their grand entrances, evocatively called “portals”—and indeed, the portal form as we know it today took shape in response to the phenomenon of pilgrimage. These huge entrances—big enough for many to enter side-by-side—are surmounted by massive carved semicircles called tympana. Tympana recounted mystical stories from the Bible (Pentecost, perhaps, or the Last Judgment), preparing visitors for their continued spiritual journey within. Statues of saints—pilgrims’ predecessors in the quest for salvation—often stand on either side of the door.

Moreover, these grand facades, just like the freestanding gateways discussed above, seem to be a global phenomenon. In India, structures like the Vishvanatha temple have imposing, cavelike entrances capped by elaborate mountain shapes. Greek and Roman temples were entered through rows of stately columns surmounted by ornamental pediments, or triangle forms. The Maori of New Zealand built sacred meeting houses fronted by “barge boards,” or enormous gables, symbolizing the arms and head of the “sky father.” Sometimes these gables were marvelously carved and could be complemented by portraits of ancestors wrought in polished wood with eyes made of gleaming shell.

Finally, at the end of their journey, pilgrims can behold their “lodestars.” These, too, have taken on similar forms in every inhabited continent and every type of natural environment. Relics—possessions or fragments of an ancestor or holy figure—are perhaps the most common such lodestars, and continue to be venerated across Africa, Asia, Europe, and the Americas under the auspices of many different religious traditions. They are sources of both protection and inspiration, as their “owners” in the afterlife are thought to have power and virtue accessible to us here below. Saints’ relics in Christianity and ancestor relics in sub-Saharan Africa are just two examples of this phenomenon.

Secondly cult statues—or three-dimensional representations of ancestors and holy figures—have also been (and remain) potent objects of devotion across Africa, Asia, Europe, the Americas, and Oceania, including ancient statues like the Athena of the Parthenon or the great three-headed Shiva at Elephanta, India. And supposedly miraculous objects are also worldwide destinations of holy questing. In the Christian tradition, these include the purported Holy Grail (the subject of many adventure films, perhaps located in Valencia) and the Shroud of Turin. Islam, meanwhile, treasures the Black Stone, which fell from heaven before the time of Muhammad. Another object that supposedly descended from the sky was the ancient statue of Artemis, mentioned in the biblical book of Acts. In Thailand, the so-called “Emerald Buddha” was revealed by a lightning strike sometime before 1434.

As objects of a spiritual quest, all of these “lodestars” have another thing in common: they are haloed, enclosed, and set apart. They are framed and exalted as fragments of some higher place, some higher plane of being, come down to earth as a grace to our yearning eyes. The Black Stone is encased in the Ka’aba (or Cube), covered in gold and jet-black silk. The Emerald Buddha sits within an impossibly sumptuous golden pavilion. Christian relics usually rest within reliquaries, which are gorgeous, sometimes jeweled containers of varied shapes (crosses, houses, arms, heads) often symbolizing the relic inside. In Africa, ancestors’ bones are guarded by beautiful carvings of stern spirits. And the stupas of Cambodia enshrine the Buddha’s ashes in shining domes or spires with delicate peaks. At the end of the quest, the lodestar remains tantalizing, separate, unreachable. Though ravishing in its beauty, it still beckons to a further beyond.

Religion in our day is often associated with joyless prohibitions and controversial political positions. But in the history of the world, religion has been nothing less than the quest for the ultimate—a process of journeying to the furthest beyond—and perhaps further still. It is this property of religion (its pointing toward the beyond) that makes the religious quest, the pilgrimage, such a potent imaginative and spiritual exercise. It makes the traversal of space an approach to heaven, and the passage through gateways a passage into another world.

Of course, the pilgrim doesn’t actually enter heaven when she goes on her sacred journey, but in another way, she does. Because it seems that matter and its properties—its expansiveness, its splendor, its difficulty, its richness—have a mysterious capacity to usher the spirit to further realms, if only for a little while. If humankind’s temples are seemingly ageless monuments to a universal vertical orientation—a global, inevitable, undeniable grasp toward divinity—then pilgrimage approaches the divine through a rhythmic unfurling of space and time.