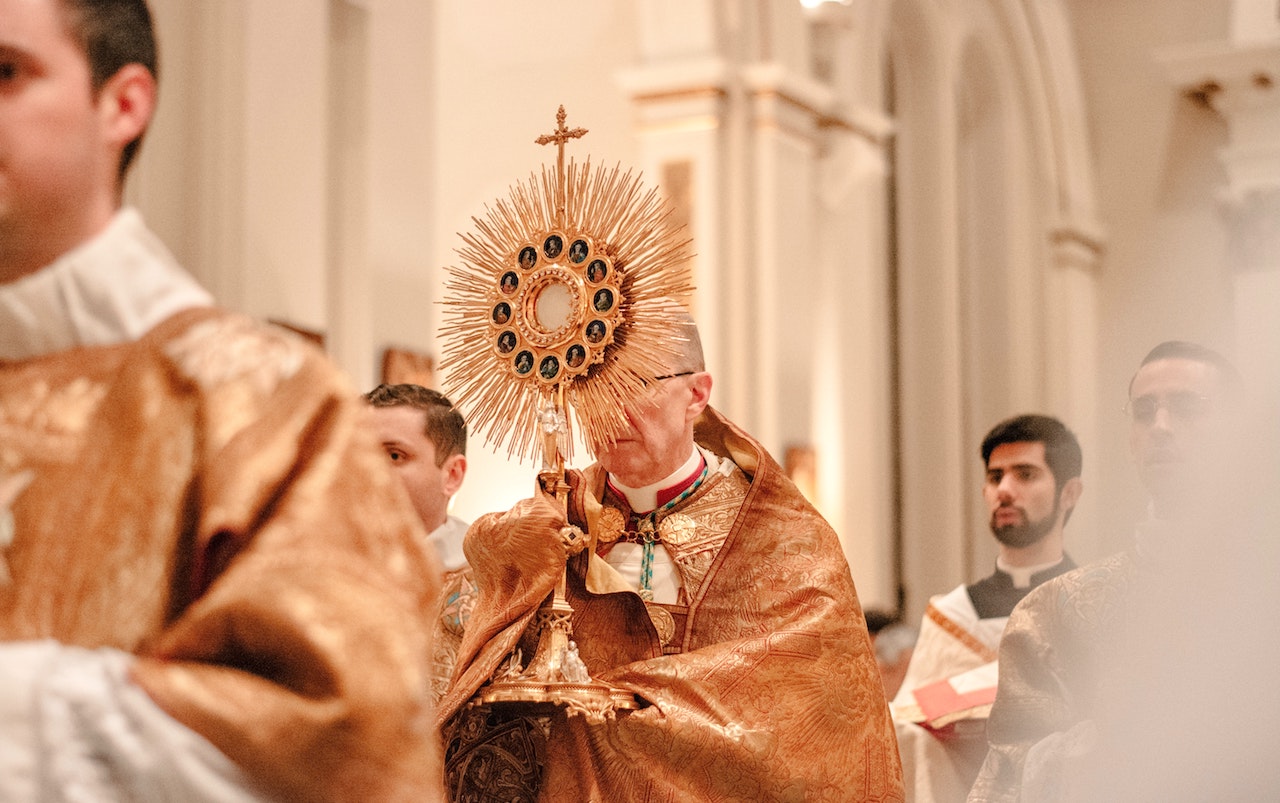 In his writings on the Eucharist, Fr. Spitzer reminds us that a Eucharistic miracle occurs everyday, at every holy mass across the world, when the substance of bread and wine is transformed into the substance of Jesus’ body and blood.

However, the term “Eucharistic miracle" can also refer to extraordinary empirical signs of Jesus’ presence in the Eucharist, such as bleeding hosts or the transmutation of a consecrated host into a piece of cardiac muscle tissue.

On Christmas Day 2013, at the Church of Saint Hyacinth in Legnica, Poland, a consecrated host fell on the floor. The host was put into a container with water so that it would dissolve. Instead, it formed red stains. In Feb. 2014, the host was examined by various research institutes including the Department of Forensic Medicine in Szczecin who stated:

“In the histopathological image, the fragments were found containing the fragmented parts of the cross-striated muscle. It is most similar to the heart muscle.”

Additionally, and similar to the findings of the Eucharistic miracle of Lanciano, Italy, research found that the tissue had alterations that would appear during great distress.

The bleeding Host in Poland was approved for veneration in April 2016, by Bishop Zbigniew Kiernikowski of Legnica who said that it “has the hallmarks of a Eucharistic miracle.” Learn more here.

In Oct. 2006, a parish in the Chilpancingo-Chilapa Diocese of Mexico held a retreat. During mass, two priests and a religious sister were distributing communion when the religious sister looked at the celebrant with tears in her eyes. The Host that she held had begun to effuse a reddish substance.

To determine the validity of the event, Bishop Alejo Zavala Castro asked Dr. Ricardo Castañón Gómez (who researched the Eucharistic miracle in Buenos Aires) and his team to conduct scientific research.

In 2013, the research concluded that:

“The reddish substance analyzed corresponds to blood in which there are hemoglobin and DNA of human origin… The blood type is AB, similar to the one found in the Host of Lanciano and in the Holy Shroud of Turin.”

3. A Eucharistic Miracle at Chirattakonam, India, 2001

Though most Eucharistic miracles have to do with a bleeding host, the one at at Chirattakonam, India was a bit different. On an April morning in 2001, Fr. Johnson Karoor, pastor at St. Mary’s parish in Chirattakonam, India, exposed the Blessed Sacrament for adoration. Soon Fr. Karoor noticed three dots on the host and shared what he saw with the people, who also saw the dots.

The priest then left for a week and came back to find that the host had developed an image of a human face. To ensure it wasn’t his imagination, he asked an alter server if he saw anything in the host. “I see the figure of a man,” the alter server replied. After mass, Fr. Karoor had a local photographer capture the image of the host below:

Read more about the Miracle at Chirattakonam here.

4. The Eucharistic Miracle in Sokolka, Poland, 2008

Before the bleeding host in Legnica, there was another Eucharistic miracle in Poland that occurred in the city of Sokolka.

The miracle took place in 2008 at the church of St. Anthony. That morning during Mass, a priest accidentally dropped a host while distributing Communion. The Host was then put in a small container of water. The pastor, Fr. Stanislaw Gniedziejko, asked the sacristan, Sister Julia Dubowska of the Congregation of the Eucharistic Sisters, to place the container in a safe in the sacristy. After a week, Sister Julia checked on the host. When she opened the safe, she smelled something like unleavened bread and the host had a red blood stain on it.

Immediately, Sister Julia and Fr. Gniedziejko told the archbishop of Bialystok, Bishop Edward Ozorowski, about the host. The Bishop had the stained host taken out of the container and placed on a corporal, where it stayed in the tabernacle for three years. During this time, the stained fragment of the host dried out (appearing more like a blood stain or clot) and several studies were commissioned on the host. The studies found that the altered fragment of the host is identical to the myocardial (heart) tissue of a person who is nearing death. Additionally, the structure of the muscle fibers and that of the bread are interwoven in a way impossible to produce by human means.

Learn more about the bleeding Host in Poland here.

“For us believers what we have seen is something that we have always believed… If our Lord is speaking to us by giving us this sign, it certainly needs a response from us.” -Bishop Cyril Mar Baselice, Archbishop of the diocese of Trivandrum on the  Eucharistic Miracle at Chirattakonam, India

The Real Presence of Jesus in the Eucharist—History and Evidence