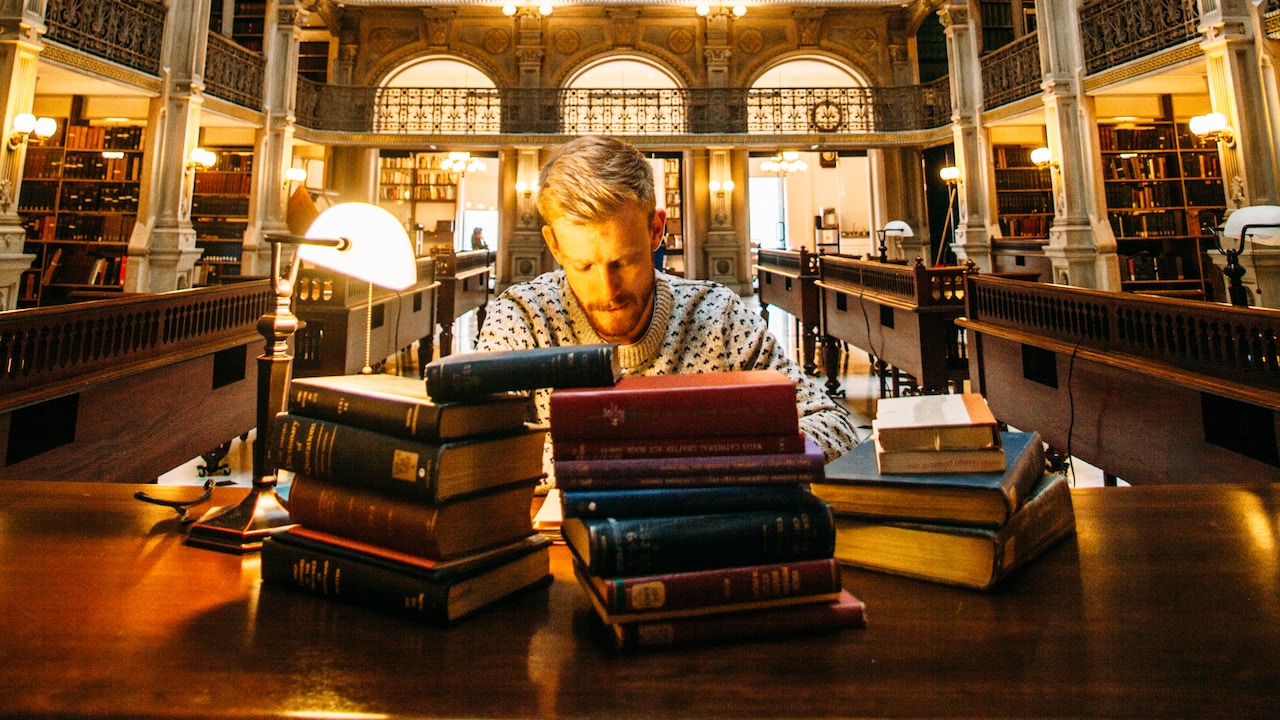 In Part I of this piece on quantum mechanics and Catholic teaching, I set forth some general considerations on how quantum mechanics might intersect theology. In part II, I’ll discuss how three weird quantum phenomena can be used as aids to understanding Catholic teaching. Specifically, these are the phenomena of superposition, entanglement and “the measurement problem.” We’ll look at the first two here and save the measurement problem for a future post.

Here’s a description of the Schrodinger cat thought experiment (see the video linked above and the image below) to give you a more concrete notion of what superposition entails. (Animal lovers—it is a “thought experiment”—no live cats were used!) 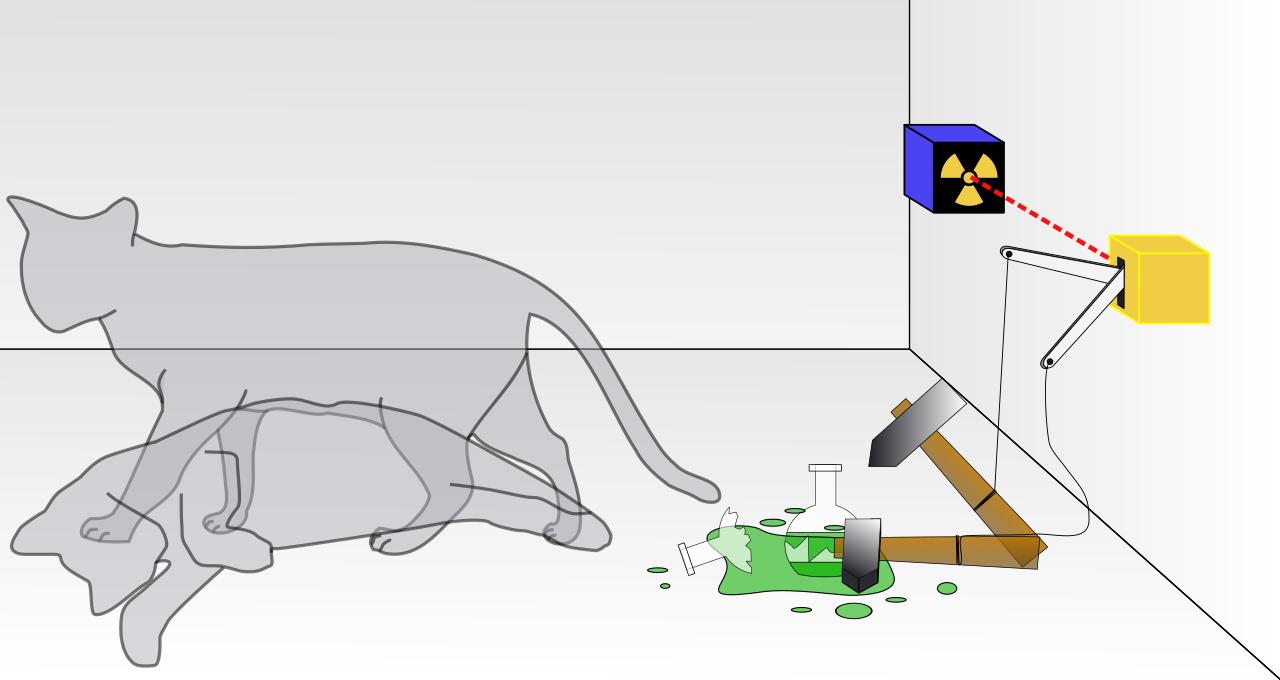 A cat is put inside a box in which a radioactive element can decay; the decay can trigger the emission of cyanide, killing the cat. There’s a 50% probability during the time the cat is in the box that the radioactive emission has occurred. When you open the box (the act of measurement) you’ll see either a dead cat or a live cat—50% probability of either event.

But before you open the box, the cat “exists” as a combination of dead cat and live cat, as the video and the illustration above shows. After the box is opened (the act of measurement) you have either a dead cat or a live one. The act of measurement has, so to speak, destroyed the superposition, and picked out one of the component states. (For those who aren’t frightened by equations, a simple mathematical description of this superposition is given in this post.)

Applying this idea to the Trinity

In terms of the theological implications, this is but an analog, a way of trying to understand a deeper mystery, much as the oft-used example of a triangle with God the Father, God the Son, and God the Holy Spirit at the corners of the triangle.

Perhaps the most non-intuitive aspect of quantum mechanics involves the entanglement of two things, such that they seem to interact (instantaneously) even when physically separated at far distances from one another (the non-locality aspect). There are many experiments that verify this.

See this article for a recent demonstration; at the top of the linked article are two cutout pictures of cats. The photons (light particles) which produced these pictures were experimentally prepared to be "entangled" and then physically separated by half-reflecting mirrors such that one passed through an object (a cutout silhouette of a cat) and another not. Nevertheless there is an image produced by the photons that did not pass through or near the imaged object (the cat).

Here's a highly non-real example that illustrates entanglement. Let's consider a man who votes Republican, marries a woman who votes Democratic, and in the marriage vows promise to vote the same way.

Voting Republican or voting Democratic is entangled between husband and wife: if the husband is away from home on election day and casts his absentee ballot as a Republican, his wife—even though she does not know how he has voted but because of their vows—will always vote Republican.  Similarly, if the wife is away and casts an absentee ballot Democratic, the husband—without knowledge of his wife's vote but because of their vows—will always vote Democratic. This is entanglement, action-at-a-distance.

No Violation of special relativity

The principle of special relativity, requiring that no information can be carried at a speed faster than light, is not violated (in real physics, if not the example), because no information is transmitted by the joint behavior of separated particles.

How entanglement leaves room for Divine action and individual beings

In the Divine Intervention Series on Quantum Mechanics, Michael Redhead gives an exhaustive treatment of the assumptions—determinism, non-locality, etc.—required for entanglement to hold.  In his article, Redhead argues that entanglement and non-locality yield an "indeterministic” and a "holistic non-separability" interpretation of quantum mechanics, such that,

"[this interpretation] allows 'room' for divine action on particular occasions… Holism is an anti-reductionist thesis that shows how every element of the universe has for its ground of being the totality of the whole, which pantheists would want to identify with God."

What are the theological implications of entanglement? Eastern mystics hold that such entanglement shows that we are non-separable parts of a universe that is one entity and that the desired state is to immerse ourselves into that entity.

As a Catholic, I don't believe that claim. In the Judaeo-Christian theology, God treats each of us as individuals, and when (or if) we attain heaven, we go as individuals. Indeed, if one examines the entangled state function, each "something" remains as an individual, even though there is a necessary connection between its properties and the properties of the "something else" with which it is entangled.

What does entanglement mean for a Christian?

The vision of entanglement is not a new one; Dante foresaw it in the 14th century in The Divine Comedy:

"In its depths I saw in-gathered, and bound by Love into one volume, all things that are scattered through the universe, substance and accident and their relations, as if joined in such a manner that what I speak of is One simplicity of Light. I think I saw the universal form, of that bond, because, in saying it, I feel my heart leap, in greater intensity of joy."  Dante, Il Paradiso, Canto XXXIII, 'The Final Vision'"

One can also argue that entanglement justifies the relation between Jesus and us, as in the Parable of the King and the Final Judgment in Matthew:

"Then shall the righteous answer him, saying, Lord, when saw we thee an hungred, and fed thee? or thirsty, and gave thee drink?

When saw we thee a stranger, and took thee in? or naked, and clothed thee?

Or when saw we thee sick, or in prison, and came unto thee?

In the next post, we will look at the “measurement problem.”