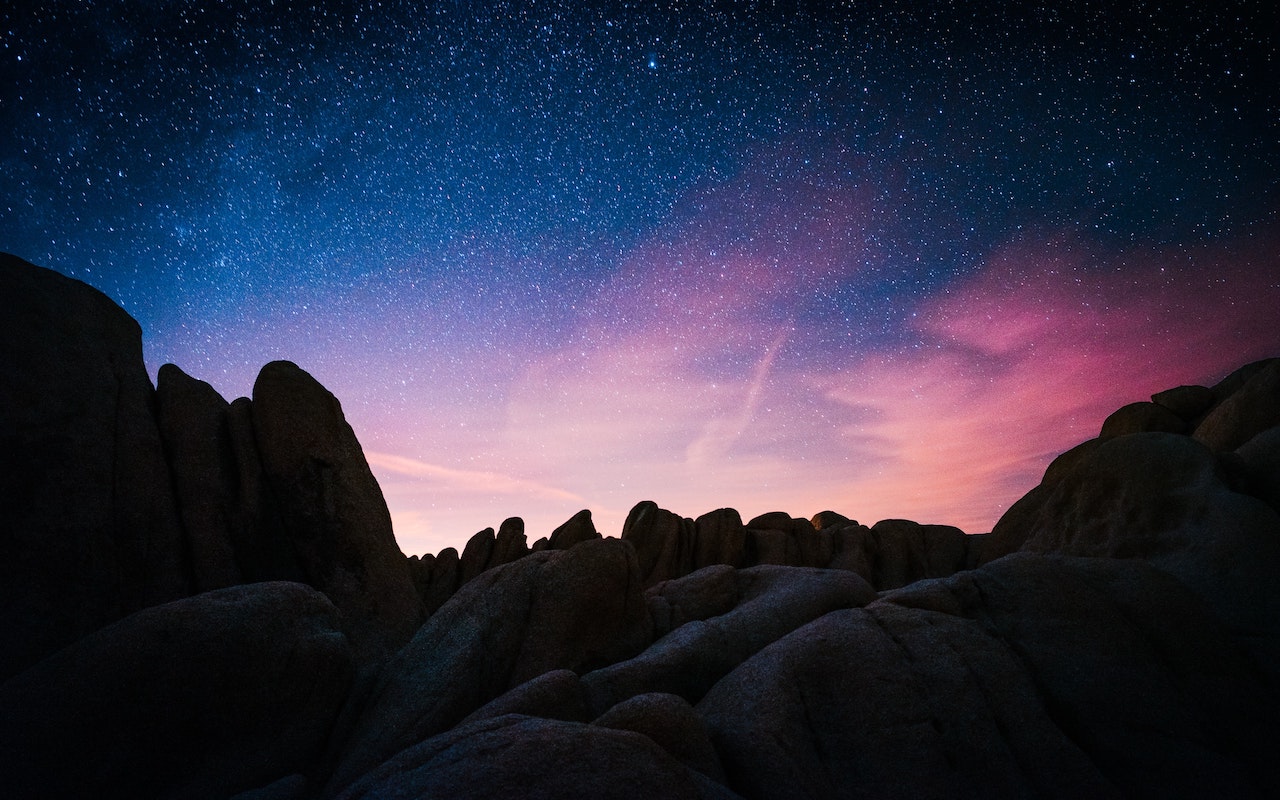 Does life, intelligent or not, exist anywhere other than on earth? And if such extraterrestrial life is intelligent, how does Catholic teaching take it into account? Speakers at the 2021 Conference of the Society of Catholic Scientists (SCS) addressed these questions, along the following lines:

Chemistry of Life (As We Know It)

If we restrict our discussion to life based on molecular biology and chemistry as we know it on earth, then we will be talking about life based on molecules containing carbon. These biological building blocks, the molecular constituents of carbon based life, reside in liquid water. In order for complex biological molecules not to break up, the water temperature should not be too high. Also, it should not be so low that chemical reactions occur too slowly. Thus there is a so-called "Goldilocks" temperature zone in which extraterrestrial life must reside.

In other articles, I have speculated about how life might have begun (see here). Because of God's marvelous gift to molecular biology, the hydrogen bond, biological molecules can undergo weak interactions. The zipper-like action of such hydrogen bonding enables DNA molecules to form helices and to unfold and to be copied. It facilitates the folding and unfolding of proteins. Because the hydrogen bonded association of protein and substrate molecules is not too strong, enzyme catalyzed reactions can proceed readily.

We can imagine a sequence of chemical evolution as illustrated in the diagram below:

The final step, the assembly of these bio-polymers into a cell with the formation of a cell wall is, at this time, a mystery.

“How the first cell came into being are matters of speculation, since these events cannot be reproduced in the laboratory." —Geoffrey M. Cooper

How the changes from one stage to the other might occur is known only in part or not at all—the arrows hide a lot that is not known. Nevertheless, there is evidence from astronomical observations that some conditions in early stages might be obtained for earth-like exoplanets and for some satellites of giant planets in our solar system.

Let us look at the first transition, from elements to simple molecules. Is there evidence that such molecules exist outside the earth?

According to Harvard Professor Karin Oberg, there is strong evidence from astronomical spectra that H2O, HCN, CH4, and other simple molecules are present in exoplanets and dust clouds in which such planets form. Exoplanet spectra show the presence of such molecules: 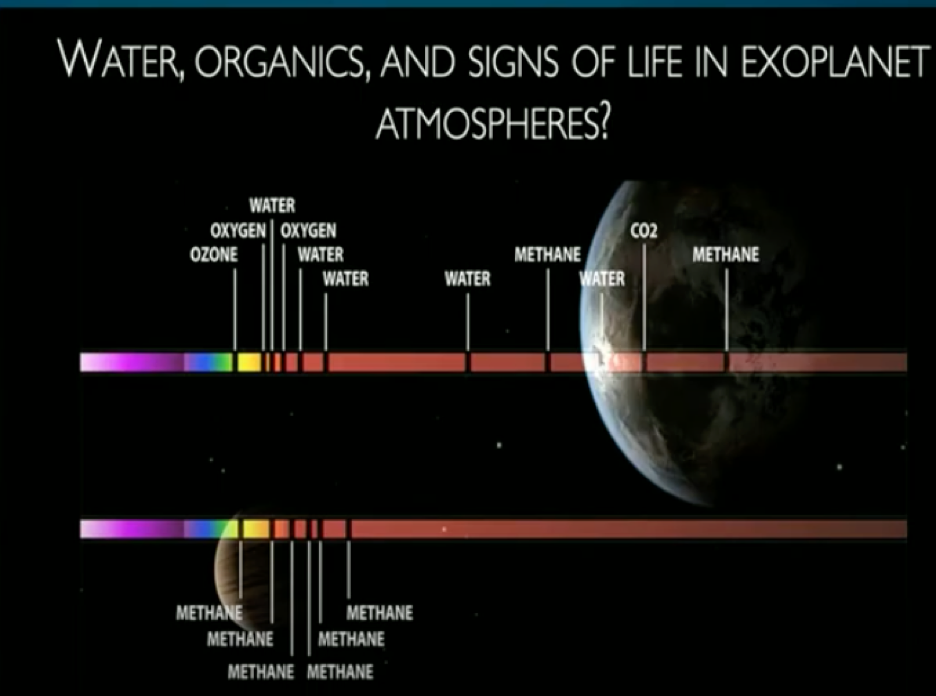 As shown in the image below, the spectra of HCN (cyanic acid) is present in dust clouds surrounding stars. Planets are formed in such dust clouds. 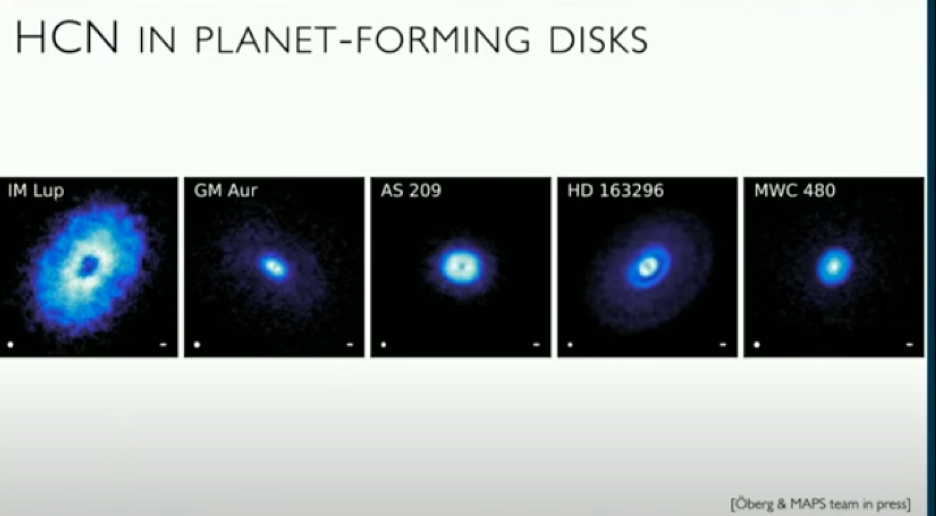 Besides the simple molecules listed above, astronomical microwave spectra provide evidence for many other simple molecules that combine to form biological building blocks (see here and here for examples). Such molecules form by the action of interstellar radiation (UV and higher energies) and through short-lived intermediates. Although their concentration is low, the volume of space dust clouds is large enough that the total amount is not negligible. Even though the reaction schemes that scientists propose to yield biological building blocks are reasonable (see here and here for examples), papers do not always give the laboratory experiments that would replicate these schemes.

In his talk, Professor Christopher Shingledecker gave a clear account of how prebiotic molecules and biotic building blocks might form on cosmic dust. Meteorites give evidence of this. And what is the most interesting feature of such evidence? Biotic building blocks are chiral, that is to say, they have a symmetry difference like that between left and right hands, as the figure below shows: 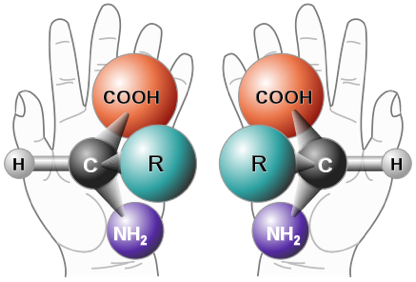 Since all naturally occurring proteins have a left-handed symmetry, one might expect the same handedness or chirality for the amino acid building blocks. In fact, the amino acids found in meteorites do show a slight excess of such left-handed amino acids. Where does this natural chirality come from? One possible mechanism is polarized radiation acting on only right-handed molecules, leaving an excess of left-handed, but this explanation is speculative. It is one of the mysteries in how such molecules are formed.

Professor Shingledecker also proposed a reaction scheme for the formation of prebiotic and biotic molecules shown in the diagram below:

Laboratory work replicating interstellar space conditions supports the scheme in the picture above.

Is the Problem of Chemical Evolution Solved?

So then, how much do we know about the formation of biotic molecules? As Professor Shingledecker pointed out, we know a lot about the first step in evolution of life's chemistry:

But at this time, steps 2-4 are still a mystery, a matter of speculation, according to John Sutherland, a prominent researcher in the chemistry of life:

"Demonstrating such a process [the steps above] in the laboratory would show how life can start from the inanimate. If the starting materials were irrefutably primordial and the end result happened to bear an uncanny resemblance to extant biology. . . . We are not yet close to achieving this end, but recent results suggest that we may have nearly finished the first phase: the beginning."—John D. Sutherland

Accordingly, since the scientific genesis of life chemistry is, to a major degree, still a mystery, let's turn to theological implications.

The Theology of Chemical Evolution—Preliminary Remarks

Before discussing this topic at greater length in a future article, let me remark on a few pertinent observations made by Professor Karin Oberg. She mentioned two possible scriptural arguments against the possibility of extraterrestrial life:

Answering the first objection, Professor Oberg noted that dinosaurs (among other species) were not mentioned in scripture, so this cannot be a valid objection. With respect to the second, Catholic teaching generally points to God as setting an ordered universe through His laws. It is the order of His creation that is the occasion for glory. As Psalm 19A has it: "The Heavens declare the glory of God and the Firmament shows forth the work of His hands."

And here's one other question posed by Professor Oberg: should we choose a God who makes us unique in the universe, an ark, or a God who fills the universe with a plenitude of life—life that as in the last chapter of C.S. Lewis's Perelandra, is ecstatic in a dance of adoration?

In a second article, I will discuss technology: how do scientists search for evidence of extraterrestrial life and (if they are there) ExtraTerrestrial Rational beings (ETRs). And in the third, I will give my own views and those of the conference speakers on the theological implications of all this.

One Night at Joshua Tree / Pawel Nolbert via Unsplash