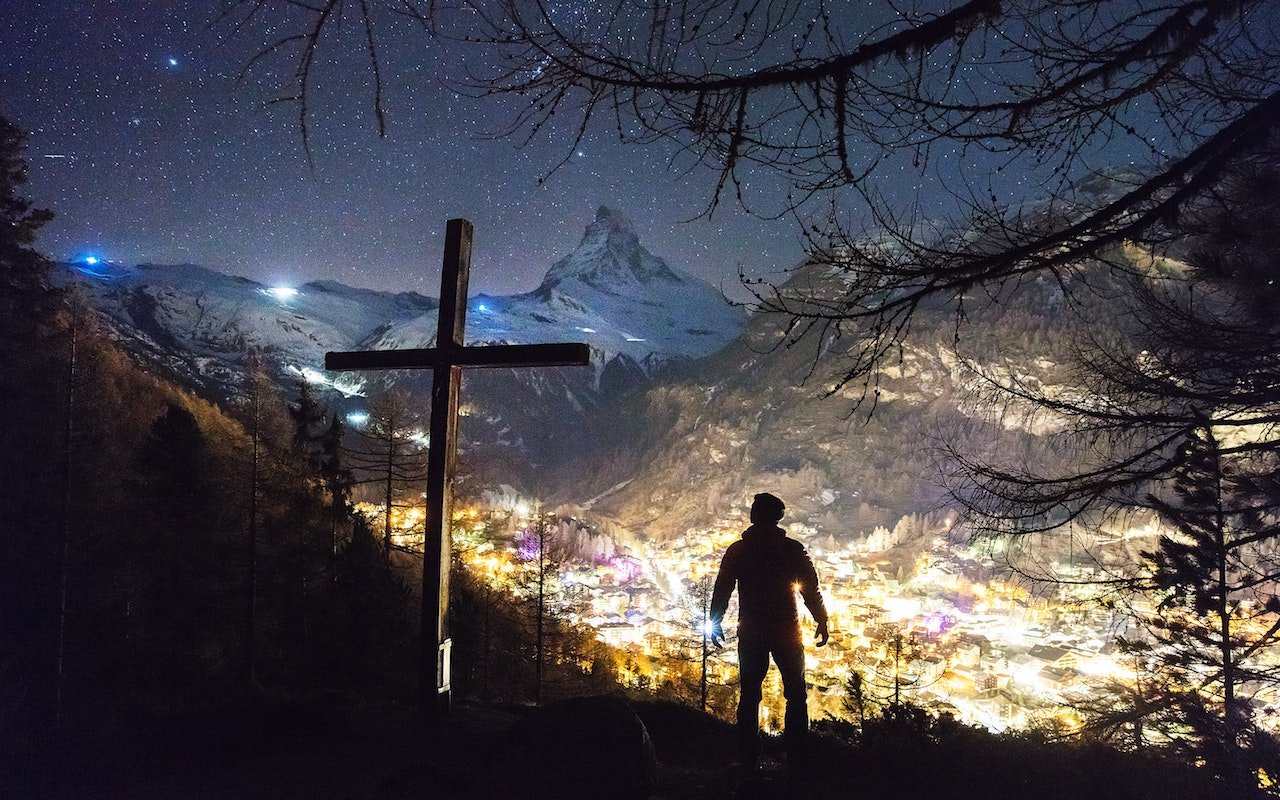 In this, the second article in the “Extraterrestrial Life: A Catholic Perspective” series, I will discuss how we humans attempt to discover whether life exists outside of our earth—extraterrestrial life. And by “life,” I mean life based on carbon compounds (see Part 1). Moreover, there are two types of searches for extraterrestrial life: one, simpler, for single-cell organisms or their chemical biomarkers; the other, for rational beings, presumably endowed with souls (like us). Since we cannot, at this time, go to other planets in our solar system—and certainly not to other stars—we have to rely on remotely controlled instruments to obtain information. Accordingly, this article will focus on the technology required for such searches.

"Be confident, small immortals. You are not the only voice that all things utter, nor is there eternal silence in the places where you cannot come." —C.S. Lewis, Perelandra

Evidence of Life on Earth Several Billion Years Ago

If we want to detect life, what should we look for? This search has been done before. In looking for evidence of life on earth in its early days, anthropologists and biologists have found the following signatures of early life:

With respect to oxygen in an extraterrestrial atmosphere, we should keep in mind that O2 in the atmosphere is not a normal state. In the absence of continual production by photosynthesis (or the equivalent), molecular oxygen will react and, thus, disappear. So, O2 is another signature of life. Here’s a question: if it is possible for non-biological reactions to yield biomarker molecules, how does one distinguish between those from non-biological and from biological reactions? The answer: by differences between relative isotopic ratios (e.g. carbon-12/carbon-13).

Now we are certainly not going to go to planets outside the solar system in the near future, nor are we likely to be going to satellites of the giant gas planets in our solar system. Maybe there will be a manned flight to Mars in the foreseeable future but, in the meantime, how do we carry out measurements like those that showed life to be present in early earth? On earth or from flyby spacecraft, we use spectroscopy—analyzing radiation from interstellar space or objects in our own solar system. On planets, satellites, and comets, we use automated instrumentation that takes samples, analyzes them, and sends the results to earth.

Was There (Is There) Life on Mars?

So, if we can’t be on Mars, then we use remotely controlled instruments such as “Perseverance,” shown below: 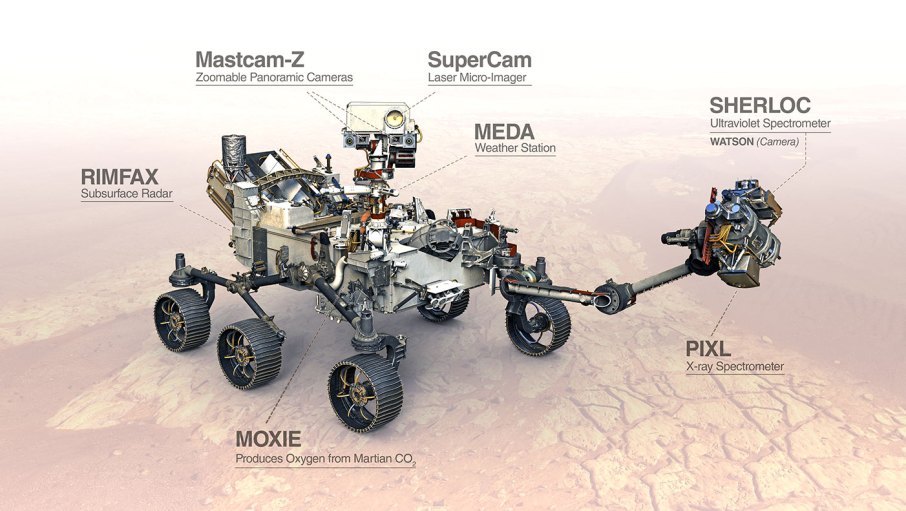 In his SCS lecture, Professor Jonathan Lunine tells how Perseverance and similar instruments search for biomarkers. Since there is evidence that water was present on Mars in its early ages, Perseverance will collect samples from where there was water in Mars’ past—such locations are more likely for life to have been present. In order for the sensitive instruments to be used for analysis, the collected samples will be taken up from a pickup by European spacecraft and taken to Earth for analysis.

And what about the rest of the solar system, the outer gas giant planets, and their satellites?

Life on Gas Giant Satellites in the Outer Solar System?

Even though the outer planets are so far away from the sun that they receive little energy, two satellites (Europa—Jupiter, and Enceladus—Saturn) have liquid water oceans covered by a relatively thin sphere of ice. The high temperature necessary for liquid water to exist is provided by internal vulcanism and tidal effects from the massive planets that the satellites orbit. According to Professor Lunine, Enceladus is probably the most likely to contain evidence for cellular life. Moreover, there is evidence that Enceladus’s ocean does contain organic molecules. Enceladus emits a plume of particles and gases at its south pole. Samples from this plume reveal, besides H2O, NH3, CH4, organic molecules, as the figure below shows.

In order to distinguish chemical species present in the plume, Professor Lunine suggests that more sensitive instrumentation (mass spectrometers) be used in future expeditions. Also, he proposes that instruments land at thin spots in the icy crust to see if there is evidence of microbial life in the ocean below.

And now to the big question: how do we search for extraterrestrial rational beings (ETR’s)?

The Search for Extraterrestrial Intelligence

Due to the fact that we associate intelligence with technological achievement, we should look for technology signatures. And what might such signatures be? According to Professor Dolch, we can classify them as follows:

Since such technological signatures will vary with time, investigators have used techniques developed in transient astronomy for detection. With advances in signal processing and computer learning, scientists can, more readily, separate weak radio signals from noise. The history of transient—time-dependent—astronomy goes back to Galileo’s study of sunspots and the phases of Venus. More recently, the development of radio astronomy and the first detection of a pulsar in 1967 has given a wealth of information about fundamental physics and cosmology.

However, the detection of ETR signals have not been successful. There have been “candidate signals,” strong signals far above the noise level like the WOW signal detected in 1977. But such signals have either been ascribed to natural (non-ETR) phenomena or have not been repeated and remain a mystery. Despite the lack of success, private funds (e.g. $100 million from the Russian capitalist, Yuri Milner, for “Breakthrough Listen”) are sustaining the search, using radio telescopes as shown below: 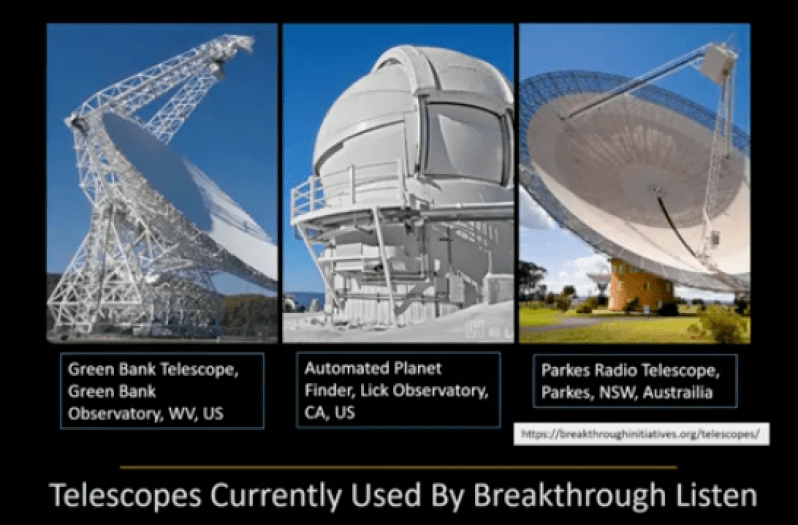 Will the search be successful? We’ll have to wait and see. But I am sure that, as a byproduct of this search, there will be new scientific discoveries.

In a third article, I’ll discuss theological implications from the SCS Conference talks and from my own speculations. However, I do want to make one point here about the search for ETRs. Those who search for ETRs assume, of course, that intelligence yields technology. Is that true? There have been great human civilizations without technology. Indeed, the development of the scientific method (and its child, technology) is linked historically to Christendom. It is the Middle Ages and Scholasticism that nurtured the development of Science (see “Essay 1, the Catholic Church, Midwife and Nursemaid to Science”). Will ETR civilizations have a corresponding history? That will be an item for discussion in the next post.