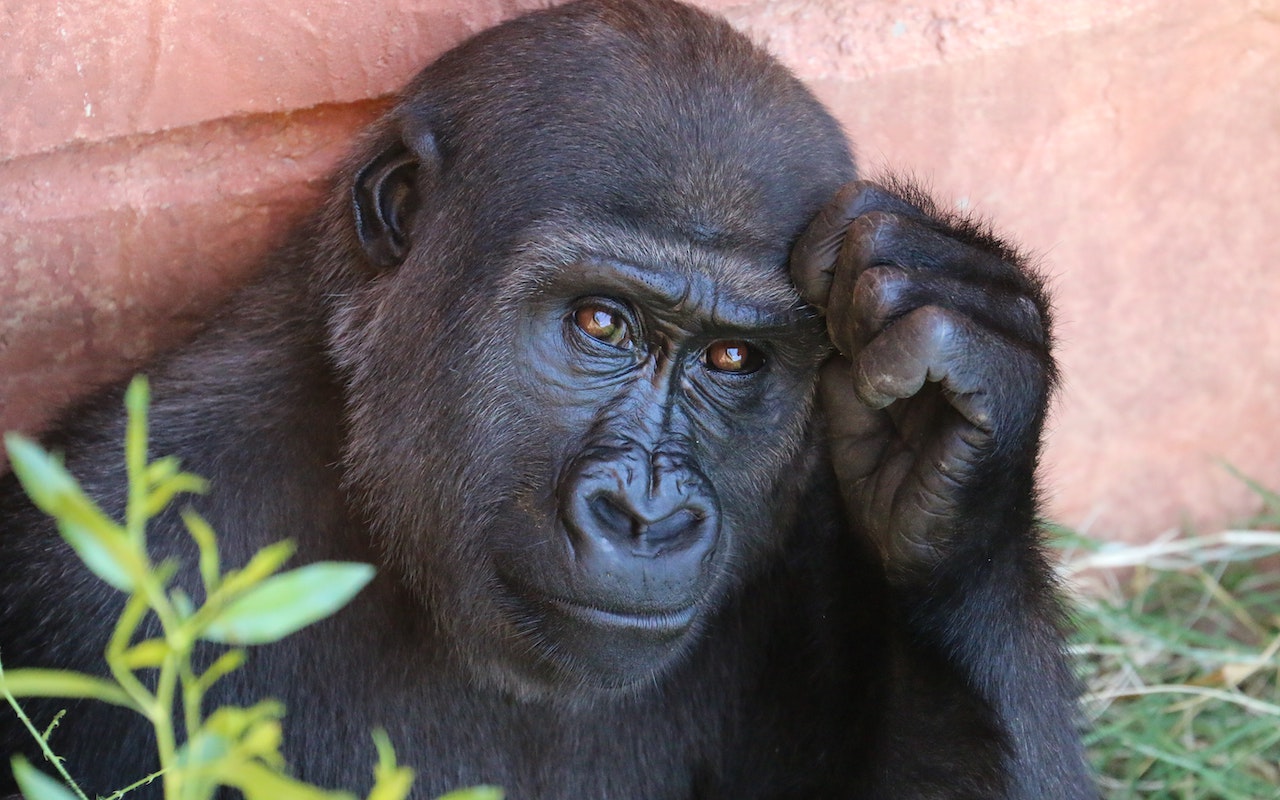 There has been considerable speculation about higher primates having similar intellectual and linguistic capabilities to humans. Some have conjectured that the difference between humans and higher primates is only a matter of degree, but the essential cognitional activity is the same.

If these thinkers are correct, it would mean that higher primates have a tacit awareness of the supreme heuristic notion of being, and are therefore, transcendent in the same way as humans. Is there any way of determining whether this is the case? As a matter of fact, there is.

Before we begin discussing the evidence, let’s begin by defining perceptual ideas and conceptual ideas:

The critical distinction between the two dovetails felicitously with a behavioral test developed by the well-known philosopher of language, Noam Chomsky. When applied to the socio-linguistic behavior of higher primates—a quick explanation of Chomsky’s test reveals that human beings are categorically different from primates, not only in their linguistic capabilities, but also in their capacity to formulate conceptual ideas in language, logic, mathematics, natural science, social science, and philosophy.

With respect to perceptual and conceptual ideas, consider the following. Look at the previous paragraphs in this article. What percentage of the words in those paragraphs have individuated referents (i.e., referents that are susceptible to pictorial imaging)? I would wager they are less than 3%.

How Humans Create and Organize Relationships Among Perceptual and Conceptual ideas

Throughout our educational process we learn how to complexify relationships among things and ideas. How? There must be some context through which to organize them—something like a map or a clock or a table of genus and species—which could provide a background or superstructure through which ideas can be related in an organized way.

Each of these superstructures has intrinsic high-level ideas which determine the way in which ideas are organized. For example,

We are now in a position to make a judgment about animal intelligence—specifically the intelligence of higher primates. Do higher primates form conceptual ideas? Do they transform perceptual ideas into conceptual ideas through interrelationships within superstructures organized by heuristic notions? As mentioned above, Noam Chomsky gave the first linguistic test to answer these questions, and on the basis of it, held fast to the belief that they do not.

There is considerable evidence, however that vertebrates generate perceptual ideas, manifesting perceptual intelligence. For example, animals can relate perceptual images, such as a rabbit and a tree, to one another spatially (as well as to themselves). Notice that what the animal perceives is an individual object or image—it is a picture in the animal’s consciousness.

More on the Animal’s Perceptual Intelligence (and Elementary Language)

So does the animal go beyond relating perceptual ideas in space and time? Do they implicitly understand the most rudimentary implications of grammar communicated by word order? If they do not, then we can be sure that they do not grasp elementary conceptual (relational) ideas—and that they are restricted to the domain of perceptual ones.

Is perceptual intelligence sufficient for elementary language? Researchers have shown that it is. For example, primates have the ability to associate signs (such as those from American Sign Language) with their perceptual (picture) thoughts. However, these associations appear to have no other purpose than to name or identify specific things (such as Joe the trainer, or a banana, or a perceptual action like running or biting) to satisfy biological opportunities (such as obtaining food or shelter) or to communicate biological dangers (such as the approach of a predator).

One of the more controlled experiments in this regard was carried out by Allen and Beatrix Gardner in 1967 (Project Washoe) in which a female chimpanzee named Washoe was raised in a very familial human environment with affection and other human bonding qualities. According to the Gardners, Washoe was able to learn 350 words of American Sign Language (which exceeds the capacity of virtually every other chimpanzee subjected to this kind of training called operative behavioral conditioning). The Gardners seemed to have achieved other successes. Washoe seemed to be able to adapt some of the learned signs for other uses, and also taught other chimpanzees some of the signs she had learned.

The Gardners’ results were challenged by Herbert Terrace who indicated that the Gardners did not have a rigorous methodology to assess Washoe’s use of language beyond codes or naming associated with biological opportunities and dangers. Furthermore, there was no real attempt to carry out Chomsky’s syntactical control test in a rigorous way.

Terrace decided to conduct a more controlled test of the Gardners’ claims at Columbia University in 1974, because he believed that many of their claims were based on misinformation from the chimp. So Terrace designed experiments that would test specifically for syntactical control and understanding within a chimp’s use of sign language.

Terrace used a famous chimpanzee named Nim Chimpsky (playing off the name of Noam Chomsky) in a much more controlled behavioral environment, which yielded more modest results than the Gardners’. Though Nim was able to master 125 signs (significantly less than the Gardners’ claims about Washoe), and could be trained to use those signs precisely as his trainer indicated, there was no evidence that Nim had any syntactical awareness, understanding, or control over the use of his signs. Terrace, et al, summarized their results as follows:

...[U]nless alternative explanations of an ape’s combinations of signs are eliminated, in particular the habit of partially imitating teachers’ recent utterances, there is no reason to regard an ape’s multisign utterance as a sentence. ... For the moment, our detailed investigation suggests that an ape’s language learning is severely restricted. Apes can learn many isolated symbols (as can dogs, horses, and other nonhuman species), but they show no unequivocal evidence of mastering the conversational, semantic, or syntactic organization of language. —H.S. Terrace, Petitto, Sanders, and Bever, “Can an Ape Create a Sentence?”

Though the Gardners claimed that Nim could have learned more signs had he been brought up in a more familial environment, no subsequent experiment with higher primate language has been able to pass Chomsky’s syntactical test. And so it seems that Chomsky’s claims about exclusively human syntactical control over language remains unrefuted.

Several other philosophers have developed tests to assess intelligence in animals (particularly higher primates and dolphins). The most famous of these were formulated by Donald Davidson in the 1980s and 90s – the intentionality test, the argument from holism, and what might be termed the “belief test.” Though these arguments are contested—including Davidson’s final and main argument (the belief test)—his analysis of the link between thought and language is quite instructive, and can be used to provide a deeper insight into the differences between human and animal intelligence (beyond Chomsky’s syntactical test).

There are other approaches to the absence of conceptual intelligence in animals, the most important of which are forwarded by Paul Moser,  Jonathan Bennett,  John Searle,  and José Bermúdez. These confirm and extend the findings of Chomsky, Terrace, and Davidson, implying a categorical difference between human and animal intelligence.

Inasmuch as syntactical understanding and control is foundational for all higher uses of language (such as using subjects, predicates, and objects to say something about something, as well as to formulate mathematical, scientific, or other theoretical expressions), it seems that human beings are the only species of animals who have the creative use of language (to create and understand expressions that they have not been trained specifically to use or understand).

In view of this, humans seem to be the only species capable of generating conceptual ideas and therefore of having pre-experiential awareness of heuristic notions and structures. This implies that humans are the only transcendental species tacitly aware of a horizon of complete and unrestricted intelligibility. As such, they are the only species capable of genuine creativity of new ideas, of surpassing the “Gödel limit to machine intelligence,” and communication through complex syntax and semantics.

The above is taken from Father Spitzer's article, “Evidence of a Transcendent Soul.” To read the full article, go here.