Men on Mars? Updates from the Red Planet 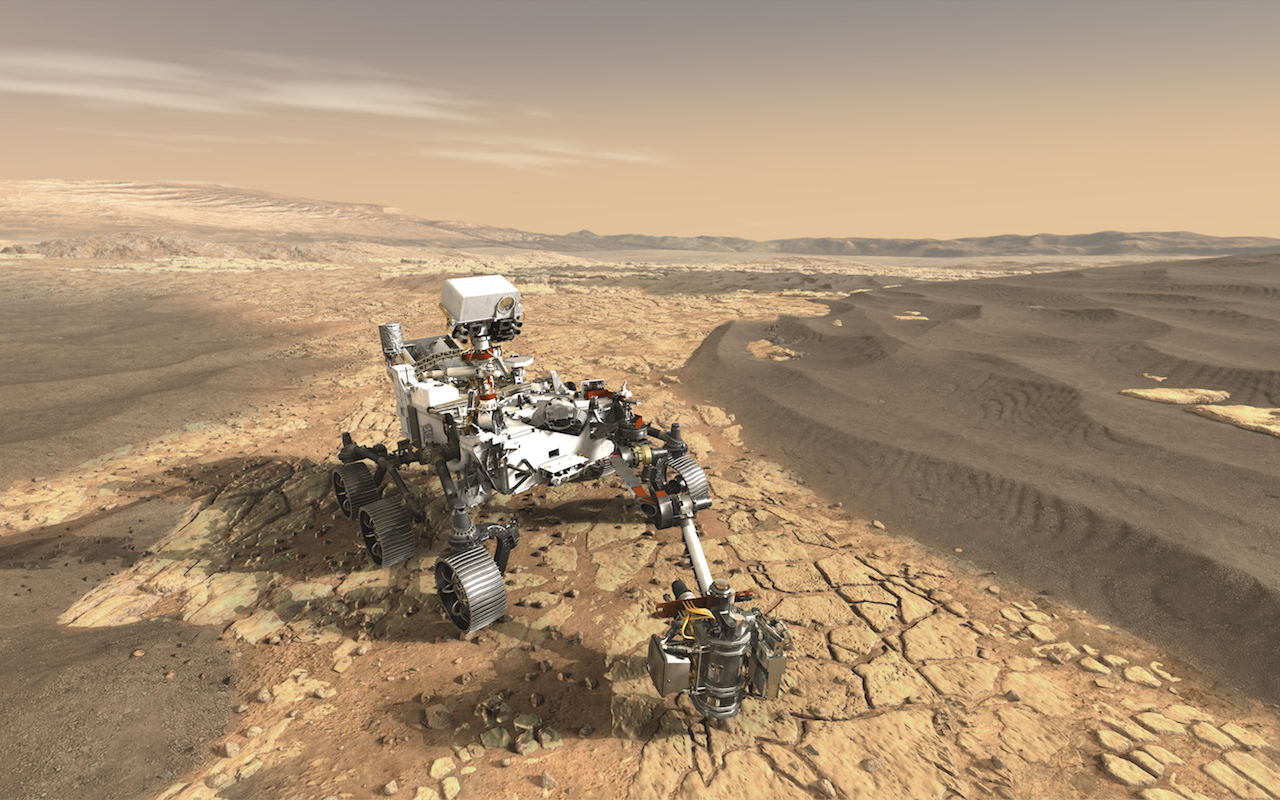 Appearing once again in the morning sky, Mars is visible just before sunrise from October to December. While this might be of interest to stargazers and early risers, Mars has also appeared in the news with startling regularity.

In April of 2019, NASA’s Insight lander used its highly sensitive seismometer, SEIS, to pick-up the first “marsquake.” In July, images of Mars enveloped in dust were released. From pictures of a strange cloud taken by ESA’s webcam to evidence of a subsurface lake and of an asteroid strike millions of years ago (that may have caused not one but two tsunamis in an ancient ocean), Mars continues to create a stir.

Mars Before and After Dust Storm / NASA/JPL-Caltech/MSSS

There are currently 8 spacecrafts studying the red planet. Two surface based sources are NASA’s rover, Curiosity, and the lander, Insight. There are also six orbiters in place, three of which belong to NASA: Mars Odyssey, Mars Reconnaisance Orbiter, and Maven. These are joined by two orbiters from the European Space Agency (ESA)—Exomars Trace Gas Orbiter and Mars Express—and one from the Indian Space Research Organisation (ISRO)— Mangalyaan.

The combined missions of these 8 spacecrafts generate unprecedented amounts of data. Our understanding of the red planet’s atmosphere, weather, water in its geological past, and the composition of its core, mantle and crust is proceeding in gigantic leaps.

How is information communicated to and from Earth?

ESA’s ExoMars Gas orbiter currently relays a significant amount of data from NASA’s rover and lander—over 60% in fact. Communication between Earth and Mars can take as little as four minutes and up to 24 minutes depending on the location of the orbiters relaying the information!

This information includes daily weather reports from the ground and atmospheric changes and planet-wide dust storms from the orbiters. The ability to monitor and predict dust storms is crucial to protecting the ground based instruments.

Contributing to our understanding of the weather on Mars, ESA’s Mars Express discovered three ozone layers surrounding Mars. The layers change with time and location and are much thinner than the layer protecting Earth. Remember, ozone high in the atmosphere protects Earth from solar wind and radiation. (For more details and links be sure to access the ESA series of infographics, “10 Things You Did Not Know About Mars.”)

In a 2015 TEDx talk, Dr. Joel Levine, a retired NASA research scientist with a 41 year career, described NASA’s intention to put a man on Mars—possibly by 2033. As startling as that may have seemed then, in 2017 NASA received Space Policy Directive-1 from the President “to lead an innovative and sustainable program of exploration with commercial and international partners to enable human expansion across the solar system and to bring back to Earth new knowledge and opportunities.”

On March 26, 2019, the President challenged the team to return astronauts to the moon in the next five years. Ahead of that return, NASA intends to partner with private U.S. companies to deliver new technologies and scientific instruments to the moon’s surface. In the following short video, the exciting possibilities of the program are described:

Testing ground for a manned mission to Mars

If this all sounds like a science fiction novel...

The news that the astronaut Nick Hague returned safely from six months aboard the International Space Station may have crossed your notice.

One of the accomplishments of his mission was to install “the second of two international docking adapters that Boeing CST-100 Starliner and SpaceX Crew Dragon commercial crew spacecraft will use to connect to the space station.”

The planned spaceship, named Gateway, will use similar technology as the “hub” of moon exploration and a future Orion mission to Mars.

The Orion Crew exploration vehicle has been tested and may be the transport vehicle for a manned Mars mission.

Why send humans to Mars?

This is an interesting question.

While not ignoring the incredible feats accomplished by robotic missions to Mars, he pointed out one important factor: these missions need to be preprogrammed, which assumes that scientists and engineers know in advance exactly what they will need.

One Mars expert told him, in fact, that a human could perform a task in two hours that might take a robot 6 months to achieve. In addition, human mobility is a highly prized commodity for exploration. For example, in an amazing feat of engineering, the rover Opportunity travelled 22.6 miles… but in 11 years! An astronaut could cover the same ground in less than a day given the right equipment and technology.

Other tasks are too complicated for a robot, such as the collection of an ice core. Apparently an ice core could provide accurate information about the red planet’s climate history—information that could help us understand the changing climate of our own planet.

Yes, we are on our way to Mars, thanks to the God-given ingenuity and creativity of the human person!

Mountains on Mole Hills and Volcanoes in Strange Lands