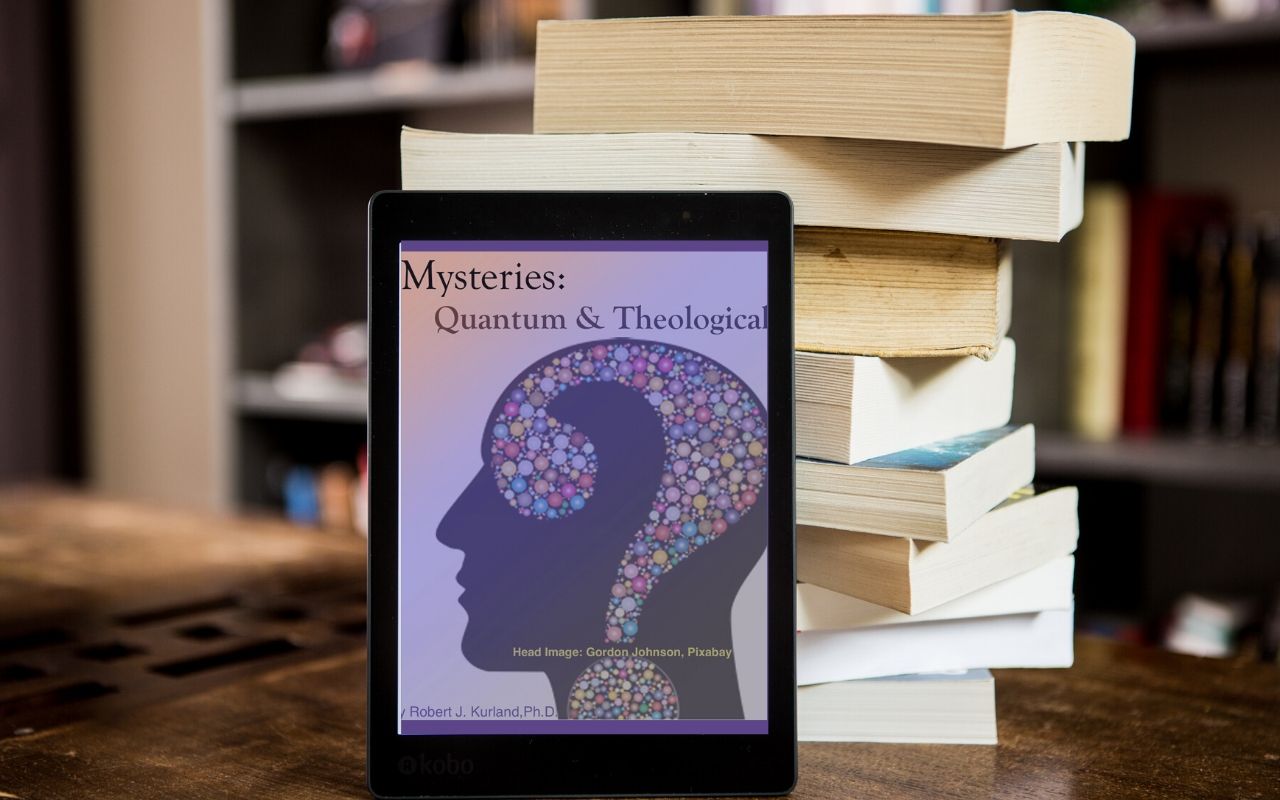 A frequent contributor to the Magis blog, Dr. Robert Kurland's posts share his reflections on the intersection of faith and science from the perspective of a convert and retired physicist.

In his most recent ebook, “Mysteries: Quantum and Theological” (available on Amazon here), Dr. Kurland provides a 60 page overview—a primer so to speak—that covers the math underlying the physics of the Newtonian world, a brief history of the emergence of the theory of quantum mechanics, and an exploration of what makes quantum theory so “weird.” In addition, he ponders the relationship between the quantum view of reality and theology, especially the Trinity, the Eucharist, the resurrection of the dead, and free will.

If the thought of exploring quantum theory leaves you light-headed, no worries. Kurland guides his readers through a review of physics and certain math concepts without cryptic, albeit impressive-looking, equations. His explanations provide a breakdown of complex topics that are not, however, overly simplistic. For those of a more mathematical bent, he provides external links which explore some of the ideas in greater depth. These links, found throughout the book, are an integral part of what makes it such a valuable resource.

Where to begin: a science primer

Kurland begins “Mysteries: Quantum and Theological” with a statement from Richard Feynman, who won the Nobel Prize for his contributions to quantum thermodynamics: “I think I can safely say that nobody understands quantum mechanics.” Kurland is confident, however, that anyone can gain some understanding of what quantum theory is and how it is used. In three chapters, he attempts to do just that.

In the first chapter, Kurland introduces the concepts from physics that are key to understanding the theory of quantum mechanics. These include waves, frequencies, the electromagnetic spectrum, momentum, and energy.

In a very concise summary of problems confronting scientists in the early 20th century, Kurland puts the issues in a meaningful context. From Planck’s constant and his “quanta” of energy and its relationship to Bohr’s model of the atom, to Einstein’s theory of relativity and the discovery of quarks (subatomic particles that make up protons), the reader sees the threads weaving this new information into a well tested theory.

To elucidate the strange behavior of quantum particles, Kurland discusses two experiments: the double slit experiment and the delayed choice experiment. These experiments reveal the “entanglement” of quantum particles and their “non-local” characteristics. The reader learns what the “observer effect” or measurement problem is, along with an explanation of the uncertainty principle of Heisenberg. These strange characteristics are discussed more fully in Chapter 2.

Chapter 2 “Quantum mysteries and interpretations” really is an untangling of the many interpretations of quantum theory, including the popular “there is no objective reality” meme. Kurland has done a masterful job in a few dozen pages. Again, this concise summary is peppered with links to clarify and explore the topics more deeply, which is indeed a valuable service.

At the crossroads: quantum theory and theology

In chapter 3, the reader is treated to Dr. Kurland’s reflections on the intersection of the strange simplicity of quantum mechanics and the mysteries found in the theology of the Trinity and the Eucharist as well as the resurrection of the dead and the existence of free will. This section is particularly interesting as Kurland discusses how the two experiments described in Chapter 1 relate to and can help explain these theological mysteries.

In this incredibly concise introduction to quantum theory, its history, and implications, Dr. Kurland has provided readers with a valuable guide to understanding the quantum world. The universe is indeed a strange place, but in “Mysteries: Quantum and Theological” Dr. Kurland has shown that we can still feel at home in it once we understand where the signs are leading.

You can order “Mysteries: Quantum and Theological” here. Also, be sure to check out read Dr. Robert Kurland’s blog, Reflections of a Catholic Scientist. For his posts on the Magis Center blog, click here.