Of Nativity Scenes, Saints, and Animals 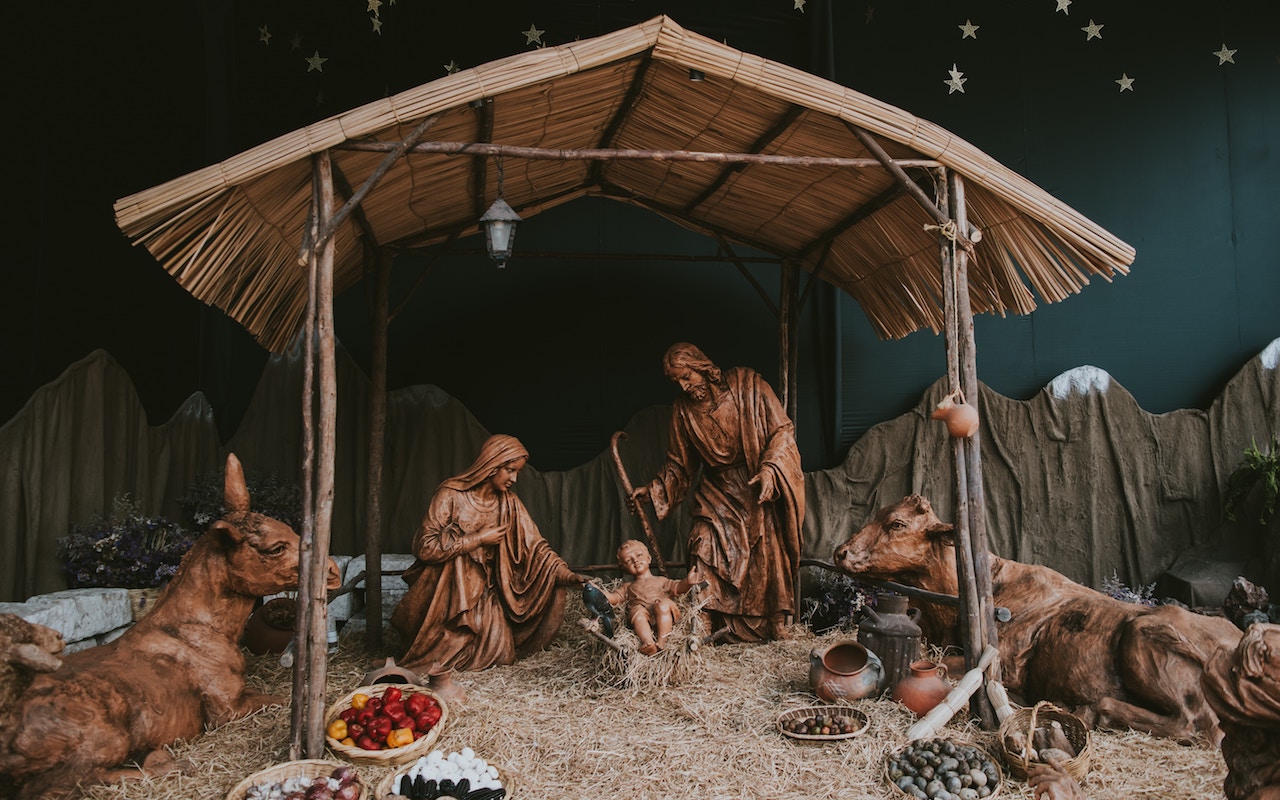 “Ox and ass before him bow, for he is in the manger now. Christ is born today!” -In Dulci Jubilo

St. Francis of Assisi is credited with creating the first nativity scene or creche. It is said that reflecting on his own trip to Bethlehem, St. Francis wanted to capture that holy moment when the God-man first became visible to the loving gaze of Mary, St. Joseph, the shepherds, and later the three wise men.

According to Fr. Wintz, O.F.M , St. Francis wrote to his friend and follower, Giovanni Vellita, who lived nearby in Greccio where there happened to be a cave:

If you want to celebrate the Feast of the Lord at Greccio, hurry and diligently prepare what I tell you. For I wish to recall to memory the little child who was born in Bethlehem. I want to set before our bodily eyes the hardships of his infant needs, how he lay in the manger, how with an ox and ass standing by he lay upon the hay. -St. Francis of Assisi

It is uncertain whether or not the babe placed in the manger at Greccio was real, but there is no dispute that the scene involved living animals.

Although St. Francis is the saint most universally associated with animals, he is not alone.

Of saints and animals

Multiple saints are known for their relationship with a particular animal or else for deeply respectful attitudes toward animals. This list includes a pope, a “healer of animals,” a Scripture scholar, a monastery foundress, and an early Church father.

Pope St. Sylvester (feast day December 31), reportedly brought a bull back to life that had been killed by a magician. St. Modesto (December 16), Patriarch of Jerusalem from 631-634 A.D., is credited with being a healer and protector of animals, and in Greece, is the patron saint of farm animals.

It is said that St. Jerome (September 30), who gave us the Septuagint (the Latin translation of scripture) removed a thorn from the paw of a lion after it wandered into one of his lectures, causing general panic among his students. The legend holds that the lion then remained with St. Jerome at his monastery until his death.

St. Gertrude Nivelles, who co-founded a monastery with her mother, welcomed animals along with travelers and the sick. Statues and paintings of St. Gertrude depict her with mice or rats, which led to a modern association of her as the patron saint of cats. There is, however, a second contender for this association in Julian of Norwich. Living a life of solitude and prayer, apparently Julian’s sole companion was a cat.

Finally, St. John Chrysostom, the “golden mouthed” known for his uncompromising but eloquent preaching, had this to say about animals:

The Saints are exceedingly loving and gentle to mankind and even to brute beasts… Surely we ought to show them great kindness and gentleness for many reasons, but above all, because they are the same origin as ourselves. -St. John Chrysostom

From bees, boars and bears, to swans, dogs, and deer, take a look at this more exhaustive list of animals involved in the lives of the saints.

Why should we care about animals?

According to the Catechism of the Catholic Church, respect for all of creation is linked to the seventh commandment. In fact, animals have a role to play in the life of man:

Animals, like plants and inanimate beings, are by nature destined for the common good of past, present, and future humanity. (2415)

Animals are God’s creatures. He surrounds them with his providential care. By their mere existence they bless him and give him glory. Thus men owe them kindness. (2416)

Additionally, in the "Compendium of the Social Doctrine of the Church" we are reminded:

This is why Christian culture has always recognized the creatures that surround man as also gifts of God to be nurtured and safeguarded with a sense of gratitude to the Creator. (975)

If we are to have such deep respect for animals, is it legitimate to use them in research?

Again, when we turn to the teachings of the Church, we find:

Hence it is legitimate to use animals for food and clothing. They may be domesticated to help man in his work and leisure. Medical and scientific experimentation on animals is a morally acceptable practice, if it remains within reasonable limits and contributes to caring for or saving human lives. (2017)

With this in mind, in the next post, we will take a look at recent developments relating to animal cognition and learning, and the role animals have played in advancing the  understanding of human cognition.

So, during these 12 days of Christmas, as you continue to contemplate the Nativity scene with its reverent sheep, ox, and donkey (and perhaps a camel or two!) remember that all of creation “proclaims the glory of God.” (Psalm 19)

May the Light from the cave at Bethlehem fill your hearts and homes this Christmas season.

Grinch Speaks: How Can We ‘Rejoice’ When the World is a Mess?

Fulton Sheen’s Christmas Broadcast of ‘Life is Worth Living’

What Are You ‘Shopping&#8217; For this Christmas Season?