St. John Paul II on the 100th Anniversary of His Birth 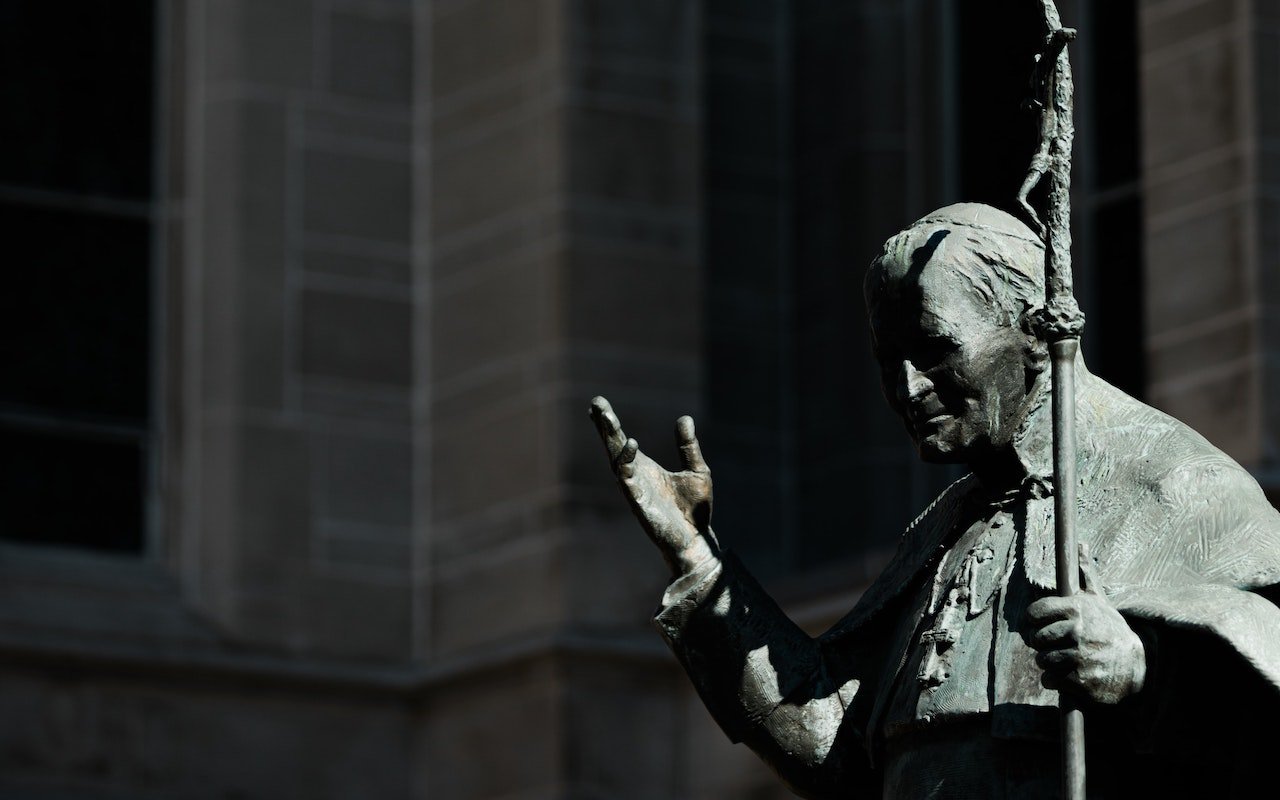 On October 16,1978, these three words rang out from the balcony of St. Peter’s basilica and began the 26 year pontificate of John Paul II. They were a clarion call and a rallying cry that pierced the minds and hearts of many who heard them. Who could have imagined what sweeping and breathtaking changes were going to spring forth during and because of his pontificate?

Today, May 18, would have been St. John Paul the Great’s 100th birthday. The tributes and memories shared around the world are many and heartfelt, as reported by the Vatican News agency.

Pope Francis celebrated Mass at the altar where St. John Paul II is buried. In his homily, he remarked that the Pope was a man “sent by God” to guide the Church. Pope Francis commented on JPII as a man of prayer, one who went out among the people, and throughout his pontificate preached the message of justice and especially mercy.

The emphasis on divine mercy was also highlighted by Pope emeritus Benedict XVI in a letter to the Polish bishops:

"Thanks to the risen Christ, the mercy of God is for all… By demonstrating the essential importance of divine mercy, [John Paul II] gives us the opportunity to accept the moral demands placed on man, even though we can never fully satisfy them. Our moral efforts are undertaken in the light of the mercy of God, which reveals itself as strength that heals our weakness." -Pope emeritus Benedict XVI

Pope John Paul II’s personal secretary, Cardinal Stanisław Dziwisz, also remembered him as a man of prayer, kindness, and love. Not only did the Pope create a family atmosphere in the pontifical apartments, but Cardinal Dziwisz remarked that everyone who came in contact with him was inspired to be more dedicated in their jobs.

“No other Pope has done more to heal the painful wounds and to effectively erase the scourge of antisemitism.” -Chief Rabbi of Poland, Michael Schudrich

The U.S. ambassador to the Holy See, Callista Gingrich, noted that “he was the first pope to visit the White House in 1979, and made seven apostolic visits to the United States” and that President George W. Bush awarded John Paul II the United States’ highest civilian honor, the Presidential Medal of Freedom.

There was even a virtual commemorative event in Russia held through the Library for Foreign Literature. A statue of St. John Paul stands in the atrium of that library—impossible to have imagined this in 1978!

John Paul’s 14 encyclicals covered an array of topics including Catholic social teaching, the relationship of faith and reason, the Gospel of Life, family life, and the enduring nature of the Church’s missionary vocation. His many letters and exhortations covered an equally varied list of topics.

What has become known as the theology of the body began as a series of John Paul’s Wednesday audience talks early in his pontificate. Speakers, retreats, conferences, and whole institutions have sprung up from the unpacking and spreading of this life-giving message about the meaning of marital love and our bodies. The Institute on Marriage and the Family at the Catholic University of America and the Theology of the Body Institute are just two examples in the United States. Listen how John Paul’s vision changes lives in a few testimonials from the Theology of the Body Institute here.

According to George Weigel’s recent Templeton Lecture on Religion and World Affairs, Pope John Paul II’s impact on contemporary history is difficult to fully comprehend, but his accomplishments spring from a particular understanding of history and the nature of resistance to totalitarian powers. Weigel noted that “overwhelming material force can be resisted successfully through the resources of the human spirit— through culture — and that culture is the most dynamic, enduring factor in human affairs, at least over the long haul.”

As John Paul II’s biographer, Weigel can testify to the Pope’s direct link to the fall of Communism in 1989. It began with the Pope’s historic visit to his homeland in June 1979. In a series of homilies, lectures, and even impromptu remarks, the Pope sparked a revolution of conscience in the minds and hearts of his countrymen and women. He “shaped the politics of east central Europe in the 1980’s as a pastor, evangelist, and witness to basic human rights.” Weigel also notes:

“To be sure, there were other factors in creating the Revolution of 1989: the policies of Ronald Reagan and Margaret Thatcher; Mikhail Gorbachev; the Helsinki Final Act and its effects throughout Europe. But if we ask why communism collapsed when it did—in 1989 rather than 1999 or 2009 or 2019—and how it did, then sufficient account has to be taken of June 1979. This is a point stressed by local witnesses: when I first began to research this question in 1990, Poles, Czechs, and Slovaks, religious and secular alike, were unanimous in their testimony about the crucial impact of June 1979. That, they insisted, was when “1989″ started.” -George Weigel

One of the many letters to specific groups included a letter to artists, which he opened with these beautiful words:

"None can sense more deeply than you artists, ingenious creators of beauty that you are, something of the pathos with which God at the dawn of creation looked upon the work of his hands. A glimmer of that feeling has shone so often in your eyes when—like the artists of every age—captivated by the hidden power of sounds and words, colours and shapes, you have admired the work of your inspiration, sensing in it some echo of the mystery of creation with which God, the sole creator of all things, has wished in some way to associate you." John Paul II's "Letter to Artists"

So perhaps it is a fitting tribute, as reported in the National Catholic Register, that a one man performance of “Lolek” will be open for viewing May 18-20, through several online sites (Lolek is St. John Paul II’s childhood nickname). The show was written and performed by Jeremy Stanbary, co-founder and executive artistic director of Open Window Theatre. According to Stanbary, “We need messages of hope and beauty and goodness. His life is such a beautiful witness to that.”

Br. Guy Consolmogno, SJ, head of the Vatican Observatory, reflected on the significance of JP II’s papacy for the Observatory for a Polish newspaper. He commented on the intellectual, scientific, and economic context of those times:

“The papacy of Pope John Paul II coincided with the movement of both science and theology away from the old 'triumphalism,' where each field viewed the other with suspicion, to a new atmosphere where each recognized its own limitations and the opportunities that could come from fruitful dialogue.

Br. Guy next quotes from a letter written to Fr. Coyne, newly elected director of the Observatory, in which John Paul captured this new spirit:

“Each discipline should continue to enrich, nourish, and challenge the other to be more fully what it can be and to contribute to our vision of who we are and who we are becoming… Science can purify religion from error and superstition; religion can purify science from idolatry and false absolutes.” -John Paul II to Fr. George Coyne

“St. John Paul II has been an inspiration to me not only for the immense contribution of his pontificate politically and culturally, but also because of his invaluable contributions to Theological Anthropology, Theology of the Body, the Family, the Culture of Life, and ‘Faith and Reason.’ Perhaps most importantly was his personal holiness, love of youth, evangelizing spirit, and his unique synthesis of Faith and Culture that enabled the Catholic Church to be the world spokesman for marriage, family, and a culture of high humane standards. St. John Paul ardently defended objective moral standards and taught them in ways that would enable the human person and culture to flourish. What would the world have been without him? Much the less! He truly was the vicar and image of Christ on Earth!” -Fr. Robert Spitzer

St. Pope John Paul II on Why We Need Both Faith and Reason