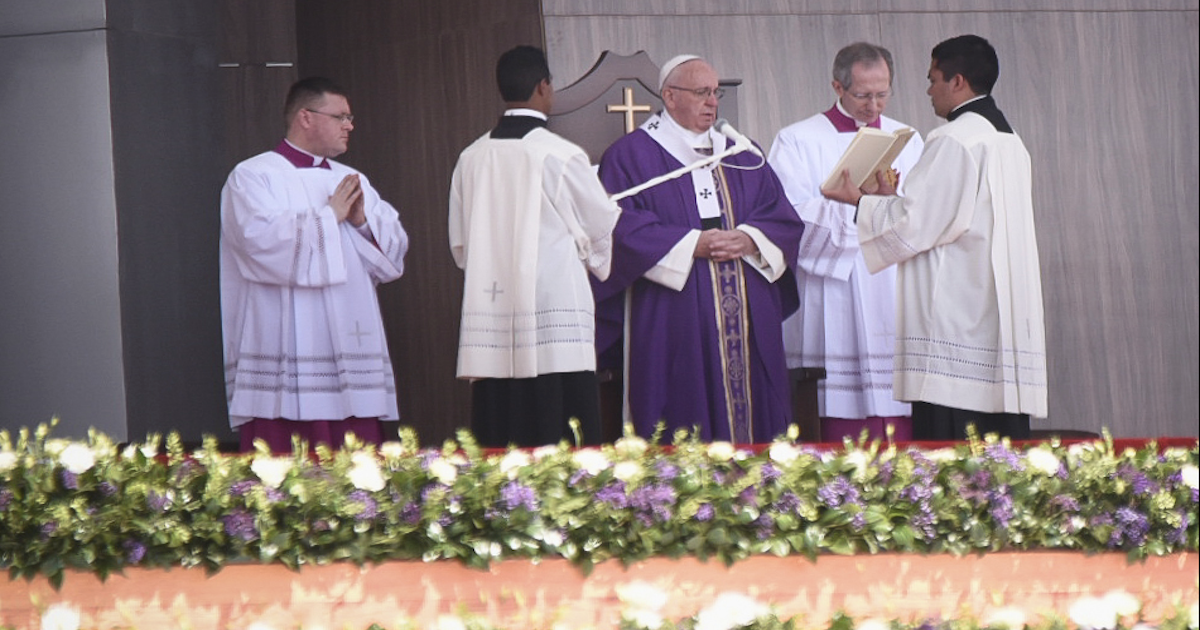 However, this term, “Eucharistic Miracle,” is sometimes used to refer to extraordinary empirical signs of Jesus’ presence in the Eucharist—most notably, bleeding hosts, or the transmutation of a consecrated host into a piece of cardiac muscle tissue. The latter is more rare.

The first reported Eucharistic miracle of the second (rarer) sort, the miracle of Lanciano, took place in the eighth century. Eucharistic miracles are quite difficult to certify scientifically, because of problems in verifying that the blood actually came from the host or that the transmuted flesh was originally a consecrated host.

On the evening of that day, Fr. Alejandro Pezet was told by a woman parishioner that a consecrated host had been desecrated on a candle holder in the back of the Church. Unable to consume the host, Fr. Pezet put it into a glass of water into the tabernacle so that it would dissolve (the ordinary practice for respectfully handling such a host).

When he opened the tabernacle on August 26, he saw that the host had been transformed into a piece of bloody tissue that was much larger than the original host. When Fr. Pezet informed Archbishop Bergoglio of the occurrence, the Archbishop asked him to have the host professionally photographed.

The photograph occurred on September 6, 1996, and it was decided to keep the host in the tabernacle without publicizing it or its origin.

After three years, the bloody tissue had not decomposed. This is truly extraordinary and virtually impossible to explain through natural causation—a miracle if you will—particularly because no special attempt was made to preserve it. Since the original photographs revealed the complete lack of decomposition, Archbishop Bergoglio asked that the bloody tissue be scientifically examined.

On October 5, 1999, in the presence of the Cardinal’s representatives, scientist Dr. Ricardo Castanon Gomez took a sample of the bloody fragment and sent it to New York for analysis.

Since Dr. Gomez did not want to prejudice the scientific committee that would be examining the tissue in New York, he did not reveal its source. A team of five scientists was assembled, including the famous cardiologist and forensic pathologist, Dr. Frederic Zugibe (author of many books on forensic pathology). Zugibe testified:

What is so remarkable about this testimony is not so much that the tissues came from the wall of the left ventricle, but that white blood cells were present in large numbers in it, meaning the tissue was removed from a heart was still alive and pumping.

This feature precludes a great number of possible scenarios of fraud regarding the Eucharistic miracle of Buenos Aires which a critic might propose, for it cannot be thought that officials in the Church had authorized the torture and death of a male with AB blood type (the same as on the Shroud of Turin and the Facecloth of Oviedo), opened his chest while he was still alive (after torturing him), and removed the tissue from his beating heart.

If this scenario is out of the question, then one must ask the origin of this tissue that came from the tabernacle where the desecrated host was stored (as witnessed by the physician who extracted it, Dr. Ricardo Castanon Gomez).

How did a piece of non-decomposing cardiac muscle tissue from the wall of the left ventricle with significant numbers of white blood cells (which had penetrated the tissue) make its way into the glass inside the tabernacle where the desecrated host had been stored in secret by Fr. Alejandro Pezet? How did this specific piece of tissue (which could only have come from a live, tortured subject) make its way into the tabernacle?

The major factors needed to avert the criticism of “pious fraud” are in place because solid medical evaluation shows that the sample had not decomposed and cannot be obtained from a deceased subject (i.e. a cadaver).

Short of the fantastic scenario mentioned above, this non-decomposing piece of tissue appears to be the result of a transmutation of a consecrated, desecrated host witnessed not only by Fr. Alejandro Pezet but also by his Bishop, Archbishop Jorge Bergoglio (Pope Francis).