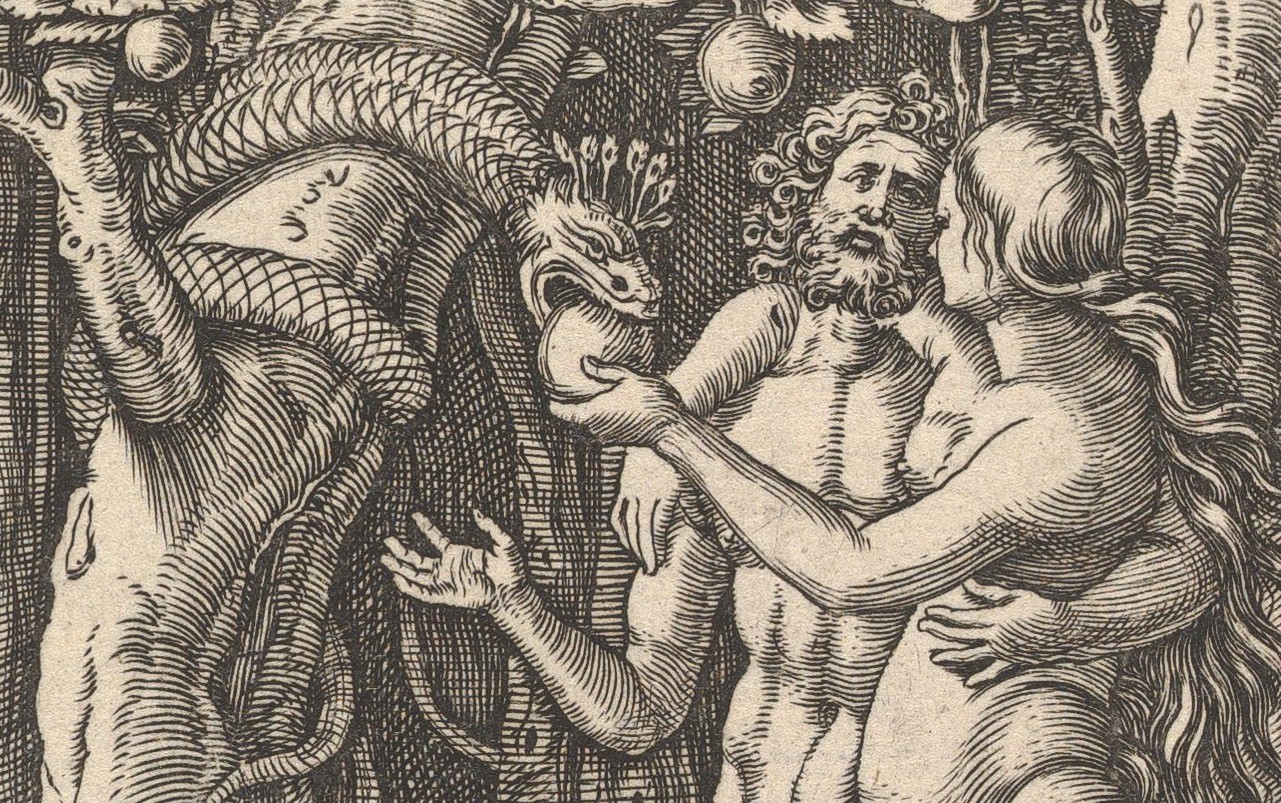 Before we begin to discuss the fall, it will be helpful to talk a little about free will. Free will arises out of a combination of several of the capacities of our transphysical soul (and God’s presence to it). At the center of free will is our capacity for self-consciousness enabling us to create our own inner world – indeed to create our own moral essence.

Key among these are empathy, conscience, and the awareness of Him (the spiritual-sacred-numinous-transcendent reality). This gave a fundamental option to human beings – to orient their thoughts and actions toward themselves—toward their inner world (self-centeredness or egocentricity)—or toward Him (in worship and prayer), others (through empathy and care), and the good (through conscience). Both options have a fundamental attraction, but in many respects, they are opposed to one another.

One might say that the first human beings felt a call to aggrandize and enrich themselves (to turn inward)—and a call to reverence God, respect and help their fellow human beings, and obey their conscience (to turn and contribute outwardly). As will be discussed below, the call to God, others, and virtue was much stronger than the call to serve and aggrandize ourselves. One might say that God gave a substantial advantage to the call to holiness, love, and goodness.

By manifesting the immense beauty and lovability of His own essence, as well as His goodness and love. It was almost irresistible, but not completely irresistible; for God wanted human beings to choose Him and His way over-against the possibility of choosing ourselves as our primary orientation.

Let’s call this “the original state of human beings.” In this state, human beings were free to choose God and others as a primary orientation or to choose themselves. However, the beauty and lovability of the first option was much stronger than that of the egocentric option.

The biblical account of original sin in Genesis 3 indicates three important points about free will and the human condition that help us understand ourselves and the need for redemption by Jesus Christ:

The story of our first parents

Let us now proceed to the fall of man and the first sin. The story of Adam and Eve is so psychologically deep and theologically insightful, it is difficult to imagine that it could have been written in 500 B.C. without the direct inspiration of the biblical author by God Himself.

The context of the story is that God has created human beings in His own image and likeness, and has withheld nothing from them.  As noted above, God created humanity with free will, but made the attraction to Him (and His goodness and sacredness) significantly stronger than the attraction to self. He gave human beings a commandment – presumably through a strong sense of conscience – not to seek for themselves the wisdom and power that belongs to Him alone. At first, the couple seems to effortlessly comply with this commandment, allowing themselves to be subordinated to and dependent on Him.

Genesis 3 begins with the serpent – representing the evil spirit  who appears on the scene and makes several suggestions that both tempt and deceive the couple. The dialogue between the serpent and the couple is worth considering in detail:

Now the serpent was more crafty than any other wild animal that the LORD God had made. He said to the woman, “Did God say, ‘You shall not eat from any tree in the garden’?” The woman said to the serpent, “We may eat of the fruit of the trees in the garden; but God said, ‘You shall not eat of the fruit of the tree that is in the middle of the garden, nor shall you touch it, or you shall die.'”

But the serpent said to the woman, “You will not die; for God knows that when you eat of it your eyes will be opened, and you will be like God, knowing good and evil.”

Then the eyes of both were opened, and they knew that they were naked; and they sewed fig leaves together and made loincloths for themselves. They heard the sound of the LORD God walking in the garden at the time of the evening breeze, and the man and his wife hid themselves from the presence of the LORD God among the trees of the garden (Gen3: 1-11).

Notice the tactics of the evil spirit. First, he suggests to the couple that God has withheld something from them—something that would be good for them, and to which they are entitled. This is a lie, because God has made them in His very image and likeness with the twelve capacities. In addition to this, He has satisfied their desires for everything.

The only thing they lack is that they cannot satisfy their desires by themselves; they are dependent on Him.

The evil spirit is aware that the couple has free will and is also aware that the couple must be dependent on God. They cannot become God themselves, there can be only one unrestricted, uncaused reality which is absolutely simple—and therefore only one reality that can be perfect truth, love, justice/goodness, beauty, and home. The couple does not know this, and so they do not recognize the serpent’s lie. They believe that if they disobey Him, they could get the wisdom and power that God had withheld from them—to which they were entitled.

They would have felt a deep sense of alienation, emptiness, and darkness from the mere consideration of this suggestion from the evil spirit; yet the suggestion seemed right—God really was withholding something from them to which they were entitled: to be precisely like Him.

The fall of man is a direct result of the sin of the original couple. The sin of the couple was to grow envious of their Creator, to resent their subordination to Him, and to reject the need to depend on Him and give praise to Him. So they entered, through the suggestion of the evil spirit, into the world of darkness through a gateway of envy, presumption, anger, and resentment. They refused to give praise to the Sacred One, so that they might have His authority and praiseworthiness for themselves.

A closer look at our first parents and the evil spirit

Is it conceivable that the first human beings (living perhaps 200 thousand years ago) could have had a special awareness of the beauty, lovability, and sacredness of the transcendent and could have wanted this for themselves, to prioritize themselves above the Sacred One, and to be envious of and resent the Sacred One? Could primitive human beings (veritable cave dwellers) have felt something like this? If they had the 12 capacities—even in a completely undeveloped state—then they could have acted against their conscience and their awareness of the Sacred “Wholly Other.”

Was the evil spirit interested in deceiving a primitive couple 200 thousand years ago? Absolutely. The moment God gave the first human beings a transphysical soul with the above twelve capacities—including free will—the evil spirit was interested in fomenting their envy, anger, presumption, and rebellion.

The evil spirit wanted to be their master, so he convinced them that they can be their own master; and after they cut themselves off from God, he readily accepted his new position. Though God does not abandon the couple to him, He does give the couple some of what they want: a partial separation from Him. If He had given them everything they wanted—a full separation from Him—they would have been subjugated to the evil spirit immediately.

Nevertheless, when the couple chose to separate themselves from God, they weakened the influence of God upon them—their awareness of His beauty, goodness, and sacredness—and so allowed themselves to come under greater sway from the evil one. Though God’s influence was still stronger than that of the evil one, it was diminished because of the first couple’s choice to separate themselves from Him (and His goodness and love). This is what is meant by the fall of man.

The 12 Capacities of Man's TransPhysical Soul

The Interior and Exterior Consequences of Original Sin