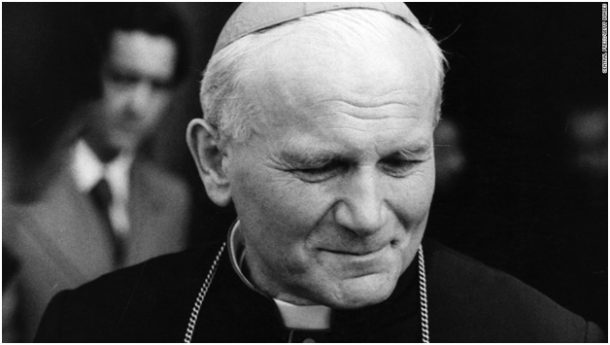 The process of canonization in the Catholic Church requires two miracles.  The first miracle for John Paul’s canonization was the healing of Sister Marie Pierre from Parkinson’s disease through his intercession.

You can watch her testimony in the following video:

She suffered a brain aneurysm in April, 2011.

After a series of tests in a hospital, including a brain scan, and after a three-hour operation, the doctors told her that her condition was inoperable and terminal and that she would have only one month to live.

After receiving the bad news, Floribeth went home, and was consigned to bed to keep her comfortable for the remainder of her days here on earth.

As a wife and mother of four children she had a strong desire to live and began praying to Pope John Paul II for his intercession.

Coincidentally, the beatification of Pope John Paul II was scheduled to take place on May 1, 2011, and Floribeth decided to watch the events on T.V.

After watching the beatification she went to sleep, but was awakened by John Paul saying, “Get Up! Don’t be afraid!”

Much to the surprise of her husband, she got out of bed and told him that she felt well. She also informed him about her encounter with the deceased pontiff.

They declared that her virtually instantaneous cure was scientifically inexplicable by any known natural agency.

Later a commission of medical physicians was assembled by the Vatican.

The commission brought Floribeth to Rome in secret, admitted her to a hospital for a new examination, and compared her current state of health to neurological records and scans from before her cure.

They also concluded that her cure was scientifically inexplicable.

This paved the way for the theological commission and Pope Francis to declare Pope John Paul II a saint.

To read more about miracles contributed to other contemporary saints such as Padre Pio and Fulton Sheen read Fr. Spitzer’s article, Contemporary Validated Miracles Associated with Blessed Mary, Saints and the Holy Eucharist.