What the Magi Saw

Explanations for the star abound, conjectures run the debates, and the historical data is a tangle.

The story of the wise men is found only in Gospel of Matthew. Pertinent details include that it was during the time of King Herod; they came from the East; they had observed the new king’s star at its rising; this announcement frightened Herod and all of Jerusalem; the star went ahead of them on the way to Bethlehem and stopped over where the child (not infant) was; they paid him homage, giving him gifts of gold, frankincense, and myrrh; they were warned in a dream to go home by a different road.

First question: when was Jesus born?

The details needed to determine the date are found in Matthew and Luke. From Matthew’s account cited above we learn that Jesus was born at the time of King Herod. From Luke’s Gospel, we learn that it occurred during a census called by Caesar Augustus “while  Quirinius was governor of Syria.”

Untangling the possible dates for the birth of Jesus is complicated by debates surrounding the date of Herod’s death and squaring that date with the recognized dates of Quirinius’ governorship. Most scholars seem to agree on a range of dates from 6 B.C. to 4 B.C., but the dates vary from as early as 7 B.C. to as late as 2 B.C.

Second question: who were the Magi?

The Gospels don’t tell us their names or how many came, but that there were three of them probably comes from the fact that three gifts are mentioned. Unfortunately, the “myth” of the Magi has been created over the centuries with embellishments and fanciful details. As a result, many Biblical scholars dispute the historical basis for the story. But don’t worry—the truth has been hacked out of the historical bedrock by several authors, as we will see.

For starters, watch this short video, by Fr. Dwight Longenecker, describing the magi in history and tradition. He is hopeful that his recently published book, “The Mystery of the Magi, The Quest to Identify the Three Wise Men” will be turned into a documentary by an interested BBC producer.

What the Magi were is more certain

Although magoi translates from the Greek as “magicians or fortune tellers,” it is more likely they were respected court astrologers or astronomers of those times. They used mathematical calculations to predict the location of stars and planets and would interpret whether those specific placements within the zodiac were positive or negative “signs.” The use of such signs is found historically in the description of the “divine” celestial events under which Caesar Augustus was born.

What is the “Star?”—Common explanations

Over the centuries, many explanations have been put forward: a comet, a supernova, a “miraculous” star sent by God—or just a story created to convince believers that Jesus was the Messiah. None of these celestial phenomena are satisfactory or fit the details of the Bible. Comets were considered evil portents, a supernova doesn’t move and stop in place, and if there was a miraculous sign, why didn’t the people of Jerusalem and the surrounding areas know about it?

As early as the 13th century another hypothesis emerged: the “star” was really a conjunction of planets indicating a regal birth.

What celestial signs would have been significant to astronomers of that time?

A popular documentary, “The Star of Bethlehem,” by Frederick A. Larson, identifies a meaningful conjunction in Leo (read “the lion of Judah”) using readily available astronomical software. However, it fails to answer the key question above.

Scholarly research has been done in recent years. The late Austrian astronomer, Konradin Ferrari d’Occhieppo (d. 2007), pointed to a rare celestial event occurring on September 15, 7 B.C. Both Jupiter and Saturn were to “rise in the east” and subsequently have a triple conjunction in Pisces, the constellation thought to be associated with Judea.

Others, like Dr. Ernest Martin, have suggested different conjunctions, all of them focusing on the constellation Pisces.

Michael Molnar’s collection of ancient coins led him to consider another possibility.

A professional astronomer himself, Molnar’s explanation in “The Star of Bethlehem: The Legacy of the Magi” (an excellent review of this book can be found here) is favored by Br. Guy Consolmogno, director of the Vatican Observatory, and other astronomers—but not all!

A first century coin from Antioch depicting a ram (“Aries”) looking over its shoulder at a star, sent Molnar on a quest to understand its symbolism, eventually leading him to the star of Bethlehem.

Molnar supports his theory with charts from ancient manuscripts and copious references, his assumptions challenged over and over in the process. In a nutshell, he discovered, in one of Ptolemy’s works, that Aries was the constellation specifically associated with Judea, not Pisces.

So what conjunctions occurred in Aries around the time of Jesus’ birth? He points to April 17, 6 B.C., a day on which every portent associated with the birth of a king can be found. The sun, the moon, Jupiter, and Saturn were all in the sign Aries, unambiguously pointing to a regal birth:

And amazingly, Jupiter, the Magi’s star, was heliacally rising in the east and in a close conjunction (occultation) with the Moon, which gave even more regal significance to that day.

No agreement about star’s identity

An unnamed Vatican Observatory astronomer (mentioned in this post) had a different sign in mind: on November 12, 7 BC, Jupiter and Saturn would have appeared at the top of the triangular zodiacal light as viewed from Jerusalem, making a beam of light appear to shine down from the two planets onto Bethlehem. 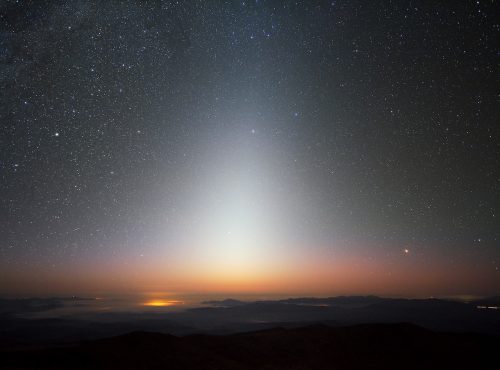 In the end, science cannot definitively identify the star or event that led the Wise Men to Bethlehem. In spite of the mythical baggage the story has acquired over the centuries, it should be no surprise that the Lord of the Universe would proclaim His coming to the Gentiles. His message of love and mercy was destined to be proclaimed to all nations and peoples.

We can surely rejoice in that, and pray, too, that like the Wise Men, we will be changed by our encounter with the King of Love who leaped down from Heaven to startle us and awaken us from sleep.

He Came in the Fullness of Time: A Reflection on the Incredible Mystery of Christ’s Birth