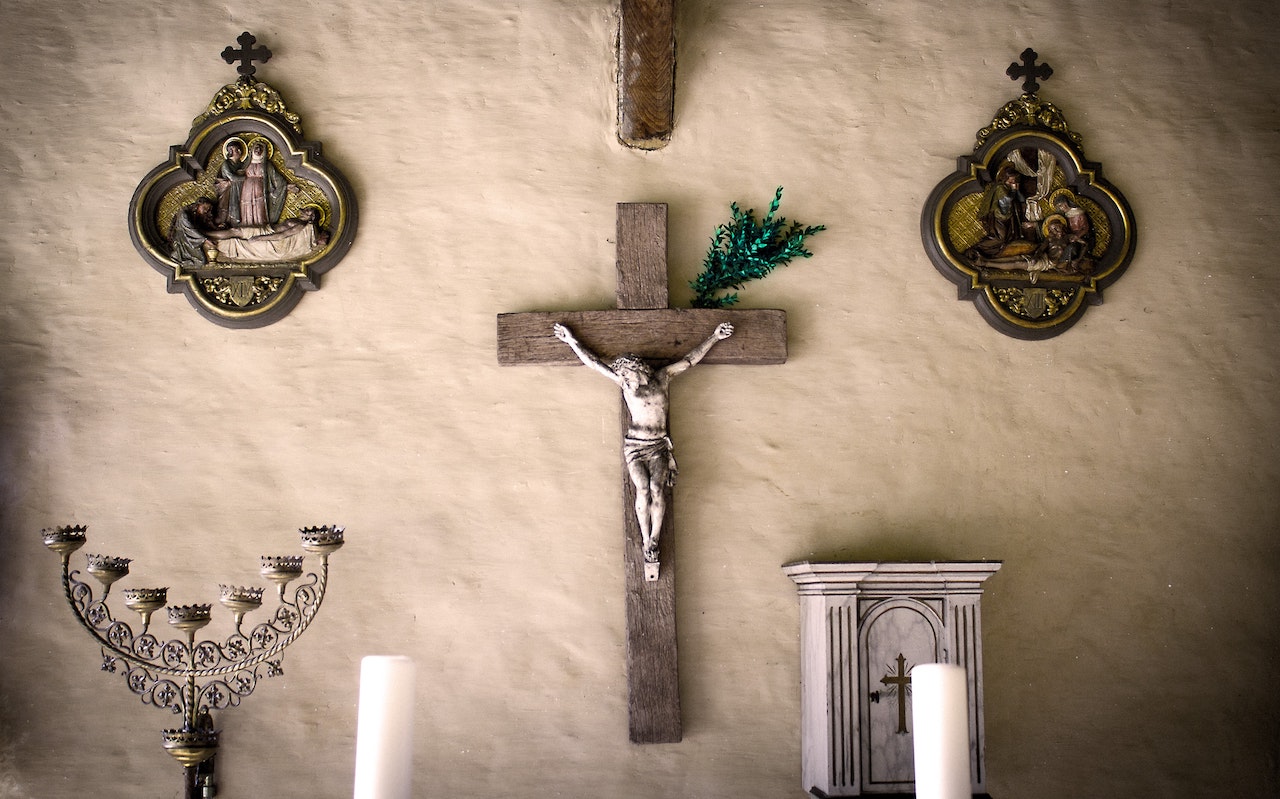 There is a story told of a little boy who comes running to his mother exclaiming joyfully, “Momma, look what I found for you!” He is clutching a beautiful rose in his little fist, and the mother sees instantly that his hand and wrists are scratched and bleeding. No thorns were going to stop him from obtaining this treasure for his mother!

Suffering is as much a part of love as it is a part of life. We suffer and witness suffering all around us in the world. Every day.

How do we make sense of this?

Torn and bleeding. Scourged for our offenses. Rejected, despised, mocked. Falling under the weight of the cross, struggling up again. And again. His life as a ransom for many.

Have you ever looked upon the Crucified Jesus and just asked, “Why?”

Fr. Edward Leen thought it was an important question, so he wrote a book: “Why the Cross?” The answer he gives is embedded in a book length reflection divided into two sections: “The Tree of Death” and “The Tree of Life.”

My burden is easy and my yoke is light

In the Gospel accounts of crowds flocking to Jesus, it is apparent that the miracles created a sensation along with certain expectations of an earthly bent. The feeding of thousands on two occasions contributed to the sense that the people’s sufferings might be ending.

Even His disciples had mistaken notions about Jesus and His mission: they thought they were part of an exciting new earthly “kingdom,” as witnessed by James and John (along with—and probably prompted by—their mother!) asking Jesus to sit on His right and left when He came into power!

According to Fr. Leen, especially in the Beatitudes, Jesus had offered the suffering crowds spiritual consolation and hope as well. Later He shatters any illusions they may have had when He tells them they must take up their cross DAILY to follow Him!

The one thing fallen man desires to know is how to live his life on earth so as to be happy. This is the very thing that Jesus desires to let him know… When men are told that the beatitude they seek is conditioned by suffering, they find the doctrine a hard saying. -Fr. Edward Leen, “Why the Cross?”

Fr. Leen observes that Jesus is indeed an idealist—desiring for us the same unity with the Father as He has Himself—wanting to make us co-heirs in His Father’s kingdom. Jesus is also a realist. He knows full well the reality of the toil and suffering of His Father’s children.

In a striking statement, however, Fr. Leen remarks:

Christ’s revelation to man was that the obstacle to his happiness was in himself not in his circumstances.” -Fr. Edward Leen, “Why the Cross?”

The power of belief

If we look back to Jesus and His miracles, there is a common thread. When performing miracles, Jesus is quick to point to the person’s “faith” that played a role in their healing.

His reputation was known. His “works” not only bore witness to His identity, but to His power: He could heal. The belief that He would heal might be linked to another truth to which Jesus bore witness: that God is a loving Father, “Abba,” the prodigal Father who waits eagerly for the return of His wayward children.

And that brings us back to the Cross.

The power of the cross

The little boy with his rose points to the ultimate witness of the cross. The cross reveals the power of love and the goodness of God—that His creative power can accomplish mighty works even from the chaos and destruction of evil.

We are called to use our suffering—our disciplining ourselves, our putting others’ needs ahead of our own—to manifest God’s love in the world. And in the greatest of all paradoxes, in losing ourselves we find ourselves, in dying to ourselves, we find life!

Jesus did not promise a life without suffering, but He did promise a kingdom in which suffering bears fruit and gives life in this world and in eternity.

In the end, Christianity is not some strange glorification of suffering. It is an honest recognition that suffering is a part of life.

It is remembering that we are the children of a loving Father. It is embracing our mission: to manifest that Love in a suffering world. It is all of creation “eagerly awaiting the revelation of the children of God” (Romans 8:19).