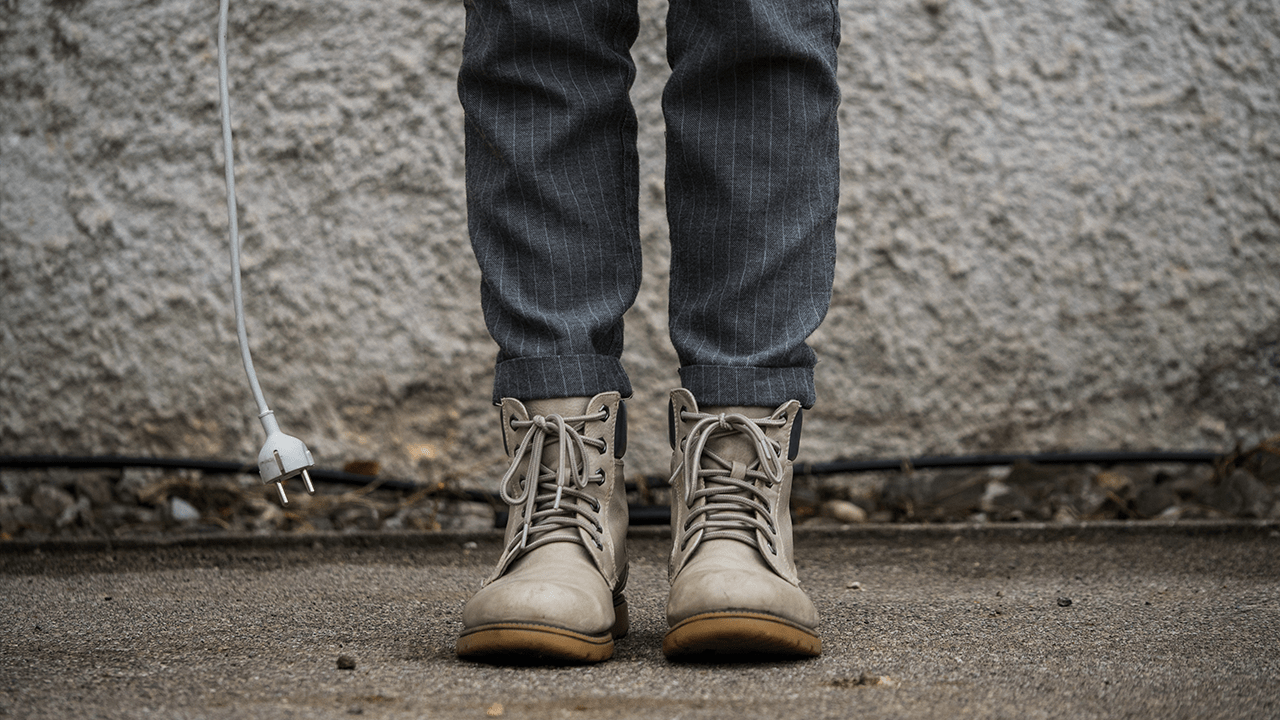 "Interestingly, the average human brain weighs about 1.5 kilograms, has about 160 billion cells and about 100 billion neurons connecting the cells. The complexities of the brain are inconceivable. One can look at the brain and see the incredible complexities and the miracles of the Divine ...or one can respond ... that this has nothing to do with G-d. Some people will be inspired with belief in the Almighty; others will claim that somehow billions of cells and neurons working together can be created through random evolution."

My favorite way to spend driving time is listening to audiobooks, one being "The Spiritual Brain: Science and Religious Experience" by Professor Andrew Newberg (hey...it's better than texting!). Dr. Newberg, Director of Research at the Myrna Brind Center for Integrative Medicine at the Thomas Jefferson University Hospital, has used SPECT imaging (Single Photon Emission Computed Tomography) to show what brain regions (and thus, what brain functions) are activated or deactivated by such religious acts as prayer, meditation, contemplation. This sheds light on the connection between religion and the brain.

The technique involves intravenous injection of a radioactive chemical that is metabolized by the brain during activity; the metabolic act/brain activity occurs almost immediately after injection, and enough residual radioactivity remains for it to be detected by imaging carried out a short time after the injection.

Another technique, fMRI (functional magnetic resonance imaging) has also been used to correlate brain activity with religious or spiritual acts. Based on my own experience in MRI (both as a subject and as an MRI research physicist), I would credit SPECT results more than fMRI for studying religion and the brain. The imaging of metabolic activity in fMRI is real-time, so it is carried on during the act of brain metabolism. One is constrained to lie within a narrow tube, so for those with more than average girth (myself included), this leads to a feeling of claustrophobia, not always conducive to spiritual calm.

Moreover, in order to achieve the high-speed imaging required for fMRI, intense field gradient pulses are used, which are exceedingly noisy and distracting, as one study has shown. Therefore we will focus on the SPECT results, even though they suffer from a lower spatial and temporal resolution than fMRI.

Before discussing Newberg's experiments and interpretation, I want to set forth two relevant issues, which will be addressed at the end of this post: the first question, "Is mind purely material--is the brain simply a meat computer or something more/other?"; the second question, "Given the relation between brain function and religious experience, how was this acquired--by adaptive evolution or bestowed by God?" If it were possible to build a self-aware android--Data of Star Trek--would that android naturally have a religious sense, or would it have to be endowed by his creator?

Let's start off with a condensed discussion about which brain regions are important for various cognitive and emotional functions (for more details please see this web presentation by Professor Elaine Hull or books by Dr. Newberg, Why God Won't Go Away and How God Changes Your Brain).

The Brain During Prayer 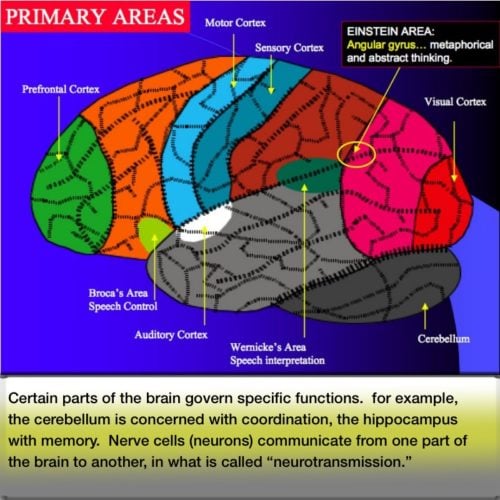 The figure above shows what regions of the brain are involved in various cognitive and emotional functions. Now the interesting result from Prof. Newberg's study is that such regions are activated or deactivated (as appropriate) in different ways during prayer or contemplation of the Deity by those experienced in prayer and by atheists.

His early study was on Franciscan Nuns who had decades of experience in contemplative prayer. In the figure below, the brain image under “Baseline Scan” is taken during "normal" activity (no prayer or meditation). The image under "Prayer Scan" corresponds to intense \ Centered Prayer. In the prayer image, the frontal lobe region ("attention") is red, more activated than during the baseline. Similarly, the "language center" (lower left) is more activated (redder) during prayer than for the baseline. Metabolic activity of the brain is color coded--blue is least, red is most; the color coding is on a relative, not absolute scale. (Prof. Newberg notes that changes in brain activity are more evident on a gray scale than with the color coding.)

The next figure, shown below, is also a SPECT can image of one of the Franciscan nuns.

Note the less intense spatial orientation area during prayer (yellow versus red). Prof. Newberg argues that the lower activity of the orientation area corresponds to a feeling of losing self, of oneness with the universe, a feeling often associated with deep meditation and contemplation. The same sort of changes are found for other adepts at meditation, for example, for Buddhist monks.

On the other hand, as shown in the figure below, an atheist contemplating God (or his/her notion of God) shows little change in brain activity. 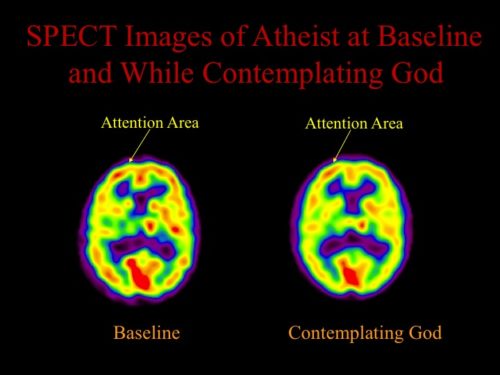 These examples are a small part of the body of work published by Newberg and other researchers on imaging; this work shows how functional changes in brain activity differ between believers and non-believers during prayer, meditation, contemplation and speaking in tongues, giving us direct insight into religion and the brain.

Other work also is relevant: studies of chemicals involved in neural transmission show changes in the regions of the brain governing emotional reactions and pleasure centers.

Newberg also proposes that the practice of prayer/meditation will improve brain function, memory, and help alleviate various kinds of brain dysfunction. One point Newberg raises is quite important: if religious experience modifies brain activity, and if one has a sudden conversion experience, how can that change brain activity if it is due only to some physical mechanism? Changes in the physiology of the brain take time, they're not accomplished in an instant.

Let's accept the proposition that changes in functional brain activity can be correlated with prayer, contemplation and other religious activity. What then? Is it the case, as Newberg proposes in the title for his book, that God changes the brains of the faithful? Is it the case, as he also proposes, that the functional correlation of brain activity with religious activity is due to adaptive evolution?

An Evolutionary Connection between Religion and the Brain?

I'll tackle the second question first, because it is easier to deal with. The notion of adaptive evolution rests on a Darwinian mechanism for evolution--that prayer increases survival prospects and thus the transmission of a genetic predisposition to prayer is enhanced. Now both Pope St. John Paul II and I believe that evolution--the descent of species--is more than just a hypothesis. However, as far as the Darwinian model goes, I and some scientists and philosophers--faithful and non-believers--are skeptical; the Scottish verdict "Not Proven" applies.

Consider the example Newberg gives: a prehistoric savage chieftain is distraught over the death of a comrade and while watching the flames of a funeral pyre conceives of the spirit of the comrade going above, like the flames, and so the chieftain finds peace. I find it hard to credit that a disposition to think of an afterlife is 1) genetically implanted and inheritable and 2) contributes to survival. Even if general qualities--intelligence, the ability to form abstractions, imagination--are due to genetic endowments and therefore will enhance survivability, one cannot conclude that particular aspects of those qualities are also due to particular genes.

Indeed, the so called "God gene" proposal rests on minimal statistical evidence. As Carl Zimmer's criticism would have it:

"Instead the book we have today would be better titled: A Gene That Accounts for Less Than One Percent of the Variance Found in Scores on Psychological Questionnaires Designed to Measure a Factor Called Self-Transcendence, Which Can Signify Everything from Belonging to the Green Party to Believing in ESP, According to One Unpublished, Unreplicated Study."

I think we can dispose of the argument that religious feelings have been engendered by adaptive evolution, or at least conclude that this proposition is not proven.

The Source of Religious Experience

The deeper and more difficult question is the nature and source of religious experience. If mind and consciousness are but emergent properties of a meat computer, the brain, then are religious feelings due only to fortuitous neural physiology, as philosophers such as Dennett, Churchland, Searles and Chalmers would propose? Or, do these thoughts and experiences come from another source, the Holy Spirit?

I have written about consciousness, self-awareness and artificial intelligence elsewhere, so I won’t repeat that discussion here (see “What Philosophers Say about the Soul” in “Essay 6: Can a Computer Have a soul?”).  I will say these philosophers are good examples of  “mind emerges from brain" proponents, although David Chalmers believes that there is something in addition to physiology (although he wouldn’t say that mind comes from the Holy Spirit). He struggles with what that something might be. (See this panel discussion, in which he posits that there’s a 42% chance that we live in a computer simulation and, in particular, see 1:38 for the odds the panelists give for that being the case.)

To address this question adequately requires a book at the very least: one would have to examine, in all its aspects, the nature of "Mind" and “Consciousness.”  One can’t do that simply by labeling the neurophysiological factors at play during a religious experience*. I don't have enough knowledge to come to anything other than a tentative conclusion. Along with the mathematical physicist, Roger Penrose, I think that quantum mechanics plays a part in consciousness, but I don't know how that’s done.

I have faith that the Holy Spirit inspires us, even though I don’t know exactly how the Holy Spirit works His ways. Along with Colin McGinn and the other Mysterian philosophers of Mind, I believe that consciousness is now and may continue to be a mystery (though I believe in God and most of them do not).

*The various views of Mind and Consciousness are explained nicely by John Searle in his book "The Mystery of Consciousness".  A later book by Searle, Freedom and Neurobiology  proposes that quantum mechanics is a necessary basis for free will and thus enters into consciousness.